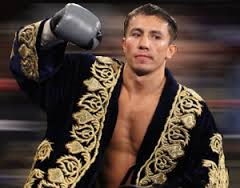 Gennady Golovkin is a fighter that loves to please boxing fans. One of the ways he pleases fans is by staying busy and putting on shows. How busy has Golovkin been? Well for starters he has fought 4 times this year which is something that many fighters will not do. Yes fans were happy for those fights but greed and choice of opponents kick in quickly.

It was recently announced that Golovkin’s first fight of 2014 will take place against Osumanu Adama. The fight is considered a soft touch fight to which Golovkin has been catching a lot of heat by boxing fans.

Is it right for Golovkin to face the criticism that he is getting? Of course not but “fans” can and will defend their opinion as much as they can no matter how annoying they can get.

Golovkin has not had an easy fight all year and a lighter fight is not a bad thing. Fans will still get to see him fight. He could easily just do what other fighters do and take most of the year off and fight once or twice but the fact that he is still putting on a show is no need for criticism. This fight may be a soft touch but who is to say that the next one will not be a very tough one? In Golovkin’s case he’s damned if he does and damned if he doesn’t.

Fans that become critics will not know what it is like since they don’t take the risk but they are still more than likely to tune in.