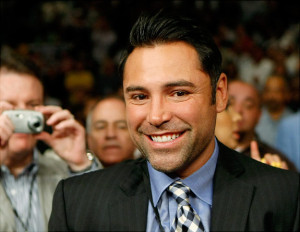 LOS ANGELES (May 6): Golden Boy Promotions today filed a $300 million lawsuit against Al Haymon and his related companies and Waddell & Reed Financial, Inc. and its related hedge funds, alleging their repeated violation of the antitrust laws and the Muhammad Ali Boxing Reform Act. The case was filed in Federal Court in Los Angeles.

Since the moment Al Haymon launched Premier Boxing Champions, he has repeatedly and brazenly broken the letter and spirit of the Muhammad Ali Boxing Reform Act that is meant to protect fighters from exploitation. As part of an anti-competitive conspiracy that includes financial backers from Waddell & Reed, Haymon has “entered into agreements to restrain trade in a substantial portion of the market for promotion of Championship-Caliber Boxers,” the bombshell new lawsuit claims.

“During my 25 years in boxing, I have watched far too many fighters be chewed up, spit out and left with nothing to sit idly by while Mr. Haymon flaunts a federal law meant to protect those who put everything on the line to entertain fans of our sport,” said Oscar De La Hoya, Founder and President of Golden Boy Promotions. “The Muhammad Ali Act was passed to help fighters avoid the fate that bedeviled so many of our predecessors; and I will do everything in my power to ensure this crucial piece of legislation is upheld and followed.”

The lawsuit alleges numerous violations of the Ali Act and antitrust statutes by Haymon, among the most glaring of which is that he routinely serves as both manager of his fighters and promoter of their fights, even though such a dual role is explicitly prohibited by the Ali Act in order to “protect boxers, the boxing industry, and the public from abusive, exploitive, and anticompetitive behavior.”

According to the lawsuit: “By ignoring the ‘firewall’ established by the Ali Act, the Haymon Defendants are essentially sitting on both sides of the bargaining table. While purporting to act in their clients’ best interests, the Haymon Defendants have obtained direct and indirect financial interests in promoting their boxers – thereby creating the very conflict of interest the Ali Act sought to remedy.”

Haymon calls himself a “manager” or an “advisor,” yet Haymon and his myriad of companies are well known to arrange and contract for the bouts, the arenas, the sponsors and the television time – all duties of a boxing promoter. Even Haymon-managed fighters themselves repeatedly refer to Haymon as their “promoter,” though he is well-known to manage more than 100 fighters.

Haymon is, not only pushing out other legitimate promoters in favor of ineffective puppets that he controls, but locking out top fighters who dare to not join his stable of boxers.

“At the age of 50 and after spending most of my adult life in boxing, I thought I’d seen every trick in the book aimed at undermining those who actually step into the ring,” said former middleweight and light heavyweight world champion Bernard Hopkins. “Having personally been refused a lucrative fight with a Haymon-managed fighter, I have felt first-hand the impact of Haymon’s attempt to form a monopoly. These practices are detrimental to boxers, fans and the sport as a whole,” added Hopkins, a co-owner of Golden Boy Promotions.

The complaint alleges that Waddell & Reed and related companies aided and abetted Haymon in his commission of the claimed violations of law.

The Golden Boy Suit comes days after the Association of Boxing Commissions called on newly confirmed U.S. Attorney General Loretta Lynch to investigate Haymon for many of the same infractions spelled out in today’s lawsuit.

As part of the lawsuit, Golden Boy is seeking damages of $300 million.

A copy of the lawsuit is available upon request.

Details of the Muhammad Ali Boxing Reform Act can be found at: https://www.govtrack.us/congress/bills/106/hr1832