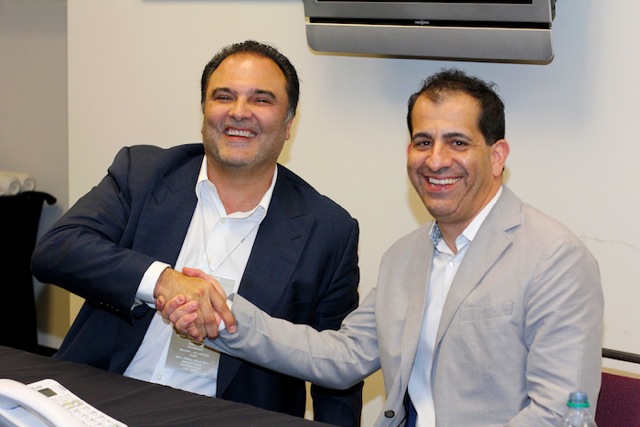 Has anyone made a bigger impact then the union between Golden Boy Promotions and Showtime? It can’t be argued anymore, Golden Boy has the largest and biggest stable in the sport of boxing today and now that it basically has its own network to showcase their fights, they have certainly delivered.

When Floyd Mayweather, Jr. left HBO for Showtime this year and when  HBO told Golden Boy that the door was closed to them, the mass exodus began from Golden Boy to Showtime and there was no looking back. It was almost what the figurehead of Golden Boy Oscar De La Hoya wanted, to have something of a monopoly similar to UFC. It was a great year in boxing for 2013 even with the “Cold War” between Golden Boy/Showtime and TopRank/HBO but no one could argue that Golden Boy/Showtime had the better year.

After Mayweather fled HBO, he had the two most successful pay-per-views when he fought Robert Guerrero in May on Showtime and the massive success of “The One’ when he took on Canelo Alvarez in what was boxing’s biggest event since De La Hoya-Mayweather. But the success of Golden Boy/Showtime is more than just Mayweather. In April, Canelo Alvarez took on Austin Trout in front of 40,000 people at The Alamodome which garnered 1.1 million people ion viewership.

The success of Golden Boy/Showtime also went East when they set foot at the brand spanking new Barclays Center in Brooklyn in 2012 that continued in 2013 with events like Garcia-Judah, Judah Malignaggi, and Broner-Malignaggi.  Each of those 3 cards did well in attendance and giving the boxing fan an outlet on the east coast that isn’t Atlantic City and can compete with Madison Square Garden.

Golden Boy gave us Mayweather-Alvarez but also satisfied the hardcore fan on the same card providing what was quite possibly the most anticipated fight from a hardcore fan’s perspective in Garcia-Matthysse on the undercard, a fight that could be its on main event, certainly making up for the one sided main event when Danny Garcia proved mostly everyone including me as he handed Matthysse a very convincing loss.

Adrien Broner is a star in his own right as he proved it three times scoring big numbers on Showtime twice and once from his February fight on HBO.

Golden Boy/Showtime also had the most exciting card of the year from top to bottom with Knockout Kings 2 that delivered a fight of the year contender in Figueroa-Arakawa, a great fight between Keith Thurman and Diego Chaves, and the drama that was Jesus Soto-Karass and Andre Berto.

In California, Golden Boy/Showtime gave us Maidana-Lopez and Lara-Angulo on one card and the possible upset on the year when Jhonny Gonzalez knocked out Abner Mares halting a possible Mares-Leo Santa Cruz fight.

Finally, could you end a monumental year any better than the December 14th card from San Antonio with Keith Thurman stopping Jesus Soto-Karass in a fun fight and with another potential upset of the year candidate when Marcos Maidana knocked Adrien Broner down twice en route to a unanimous decision victory

Make no mistake Golden Boy is stacked. They’ll have Mayweather on pay-per-view twice this year, Canelo possibly 3 times, and don’t put it past them to put a Broner-Maidana rematch on pay-per-view. While the possible Mayweather-Khan match might not satisfy us, they will most likely give us a good undercard. They have big fights on Showtime and they have given us good fights from their young prospects on Fox Sports 1. They can mix and match a lot in 2014 but what if the well runs dry and how long will it be? It’s simple, as long as Top Rank has elite talent on the other side fighting on HBO the best won’t be able to fight the best and that will hold the sport back. Although i don’t see it happening in 2014 and 2015, the two stables have to work together, but to use the cliche, don’t hold your breathe.

HBO: They may have not had a banner year but gave us fight of the year contenders like Bradley-Provodnikov, Rios Alvarado 2, Tapia-Kirkland, and Geale-Barker. They provided important fights like Marquez-Bradley and Donaire-Rigondeaux.They spent their 2013 building new stars like Adonis Stevenson, Ruslan Provodnikov, Sergey Kovalev, Mikey Garcia, Terrence Crawford, and of course Gennady Golovkin. While Showtime is cutting the distance, HBO still had the the bulk of the most viewed cards. They need to deliver more like Showtime with better undercards on pay-per-view and less one card fights. It also be nice for them to use HBO2 more to showcase the little guys like a rematch fight between Roman Gonzalez and Juan Francisco Estrada. Oh and get Stevenson-Kovalev done next year.  i expect a big 2014 out of them.

NBC Sports Network/ NBC/Main Events: I guess they can go one in the same like Golden Boy/Showtime. Main events has done well and created fighters on this platform to fight on bigger networks like Gabriel Rosado, Curtis Stevens, Sergey Kovalev, and in 2014 Bryant Jennings will get his HBO shot. Figure into that two more apperances on NBC with one of them being a good scrap between Tyson Fury and Steve Cunningham which did good ratings, expect another solid year in 2014.

Top Rank: Not quite as good of a year as their counterpart in Golden Boy but still provided most of the good fights on HBO and to most got the better crop of the 2012 Olympic class in Verdejo, Lomachenko, Valdez, Murata, and Ramirez. They also opened up a new market in China on HBO 2 with Zou Shiming which allowed fighters like Estrada, Viloria, Gradovich, Melindo, and others fight on US air which otherwise might be televised on a smaller network.

K2 Promotions: Two Klitschkos and an emerging star in Golovkin, not a bad 2013.

Matchroom Sport: Becoming the biggest promotional outfit in the United Kingdom with stars like Kell Brook, George Groves, Carl Froch, and Scott Quigg among others. Not to mention they do cross the pond and send their fighters to fight in the United States.