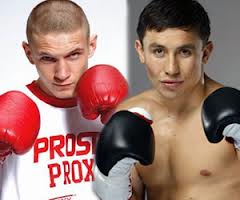 In two months’ time in New York, Kazakhstani WBA (regular) and IBO Middleweight champ Gennady Golovkin (23-0) takes on Polish EBU champ Gregorz Proksa (28-1). This bout is an attempt by both parties to gain some much needed exposure and credibility in the US and a good performance will lead to bigger pay days and better bouts. So expect both men to wear their hearts on their sleeves and give a good honest day’s work come September 1st.

Only a week or two ago me and other members of ThaBoxingVoice.com team on one of our radio chat shows spoke to Golovkin and his trainer. They’ve shown signs of frustration and claimed that Golovkin was yet to be known worldwide due to the fact he is one of the most avoided fighters in the world, despite having a major title. They state that they have offered many top ten fighters from 154-160lb good money to fight them, with little interest.

I personally buy this and sympathize for their camp. Golovkin is in a tight situation were fighting him would be a lose-lose battle for many US-known fighters; firstly, because of his tremendous power as 20 of his bouts inside the distance. Secondly, in risking a loss to a less-known fighter they do not gain too much from winning in terms of credibility.

Well newly-crowned EBU Middle weight champ Proksa has stepped up to the plate as he too would like to improve his status in the relatively deep Middleweight division. He has been EBU and EBU-EU champion before defending them both. His only loss to date is a Split Decision loss to Brit Kerry Hope. Avenging this loss in his last fight by a brutal TKO, he wants to step up again and test himself against the Kazak.

Also a hard-hitter with 21 wins by KO, Proksa is no slouch and despite also not being known much by fans outside (or even in) Europe, looks to give Golovkin a run for his money. His fight prior to the loss to Hope was the winning of the EBU against the German former IBF champ Sebastian Sylvester, who previously has defended Euro-level titles with an iron fist.

Another notable win of Proksa’s is the impressive ninth-round knockout of the Spaniard Pablo Navascas, handing him his second defeat and quite admirably his first since 2000.

The point being that the Polish EBU champ has the caliber and a good chance to beat Golovkin. I’m sure Golovkin simply wishes he could by-pass this potentially difficult bout and move straight to a cushier, more appealing bout against a bigger name, but such is life I suppose. It looks like if he wants his career to come out of the shadows of other fighters then he must take these risks which many fighters would consider unnecessary.

Both guys have something to prove and potentially a lot to gain from a win in this fight. They both are big punchers also, so expect fireworks and a great fight. I personally am struggling to separate the two and am very curious as to the result.