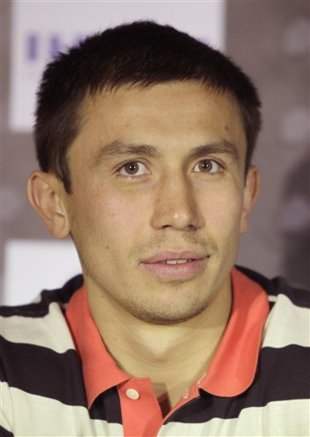 Gennady Golovkin confirmed that he will be returning to the ring in Madison Square Garden in New York City, NY on July 26th for a HBO telecast. According to Golovkin his opponent is yet to be announced, but made it very clear that he “…will fight anyone.”

Golovkin finds himself in a tough spot as he is unable to unify titles with other widely regarded middleweight champion, Peter Quillin, due to an issue with promoters as well as Golovkin being signed to an exclusive contract with HBO, a network that refuses to show Al Haymon fighters. For those who do not know, Quillin is with Al Haymon making the fight all, but a boring speculative affair for the time being.

Golovkin had been rumored to fight Jarrod Fletcher to defend his WBA middleweight title, but Golovkin is looking for the big fight to become a potential pay-per-view star. The problem is people don’t want to sign the dotted line as Julio Cesar Chavez Jr. declined to sign to fight Golovkin in July due to the fact that Chavez Jr. would have had to have signed an extension to his promoter, Top Rank. To further spice things up, Chavez Jr. is rumored to have been courted by Al Haymon.

Golovkin’s other choice would be Andre Ward, who seems content to wait out the prime of his boxing career to not fight for his current promoter Goossen-Tutor, whom he is unhappy with. Sergio Martinez has been dangled with Golovkin talks, but the thing is that Martinez essentially fights once a year and on top of that is fighting Miguel Cotto on June 7th with the out coming of that not yet being decided.

Golovkin’s other choices come down to Andy Lee and Sergio Mora, two fighters who many people do not find to be the most crowd pleasing of fighters. For Golovkin, it is simple whoever wants to fight him, he is willing to do it. The question with about eight or so weeks until the aforementioned date, who will step up to face Golovkin?

UPDATE: Since the time of this story it has been reported that Golovkin’s team is in talks with Daniel Geale.