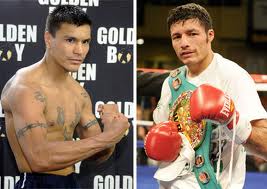 Former World Champion Daniel Ponce de Leon is set to face WBC Featherweight World Champion Jhonny Gonzalez on the undercard of Saul “Canelo” Alvarez and breakout star Josesito Lopez. This fight is called ‘Knockout Kings.’ For an extra incentive, the best knockout of the night gets an extra 100,000 dollars. The fans at home are going to vote on who deserves $100,000 dollars.

On September 15, Jhonny Gonzalez defends his WBC Featherweight Title against ex-titleholder Daniel Ponce De Leon at the MGM in Las Vegas. This bout promises to offer some excitement, as these two skilled fighters go at it. These two standout Mexican veterans have a combined 80 knockouts and that power-punching will be displayed in this fight and will be fitting to the title of the card “Knockout Kings”.

Ponce De Leon was a knockout sensation starting his career. After he lost to Celestino Caballero and Juan Manuel Lopez who stopped him in 2008, he came back with 7 straight victories. Then he lost a decision again to junior lightweight on the cusp of super stardom, Adrien Broner in March of 2011. But I had De Leon up by two rounds at the end of that fight. It certainly appeared to me that De Leon had done enough to win.

He later came back to lose a technical decision to Yuriorkis Gamboa in his next fight, but Gamboa is the total package and clearly levels above most at this weight class. De Leon has since won two straight fights, not necessarily on a Broner or Gamboa level but two solid wins on his comeback campaign.

Gonzalez is a bit of a mystery. How he continues to stay relevant in the sport after being written off after numerous losses, yet being able to bounce back and now be the WBC Featherweight Champion is a career turnaround for Gonzalez.

At age 30, Gonzalez isn’t really a young 30 having a total of 59 fights on his resume. Gonzalez has also been able to win the fights on that next level where De Leon really hasn’t been able to do on a constant basis. Gonzalez went to Japan and knocked out Hozumi Hasegawa, which was a credible win, and also one where not many expected him to pull off.

Gonzalez is maybe a bit longer with the better skill set and sharp-shooter, and more experienced. His confidence was on an all time him reeling in 12 straight victories with 11 coming by knock out. However, his last victory ended in a decision ending his 11 bout knockout streak. De Leon is only two fights into his comeback and may not yet be ready for clash with Gonzales.