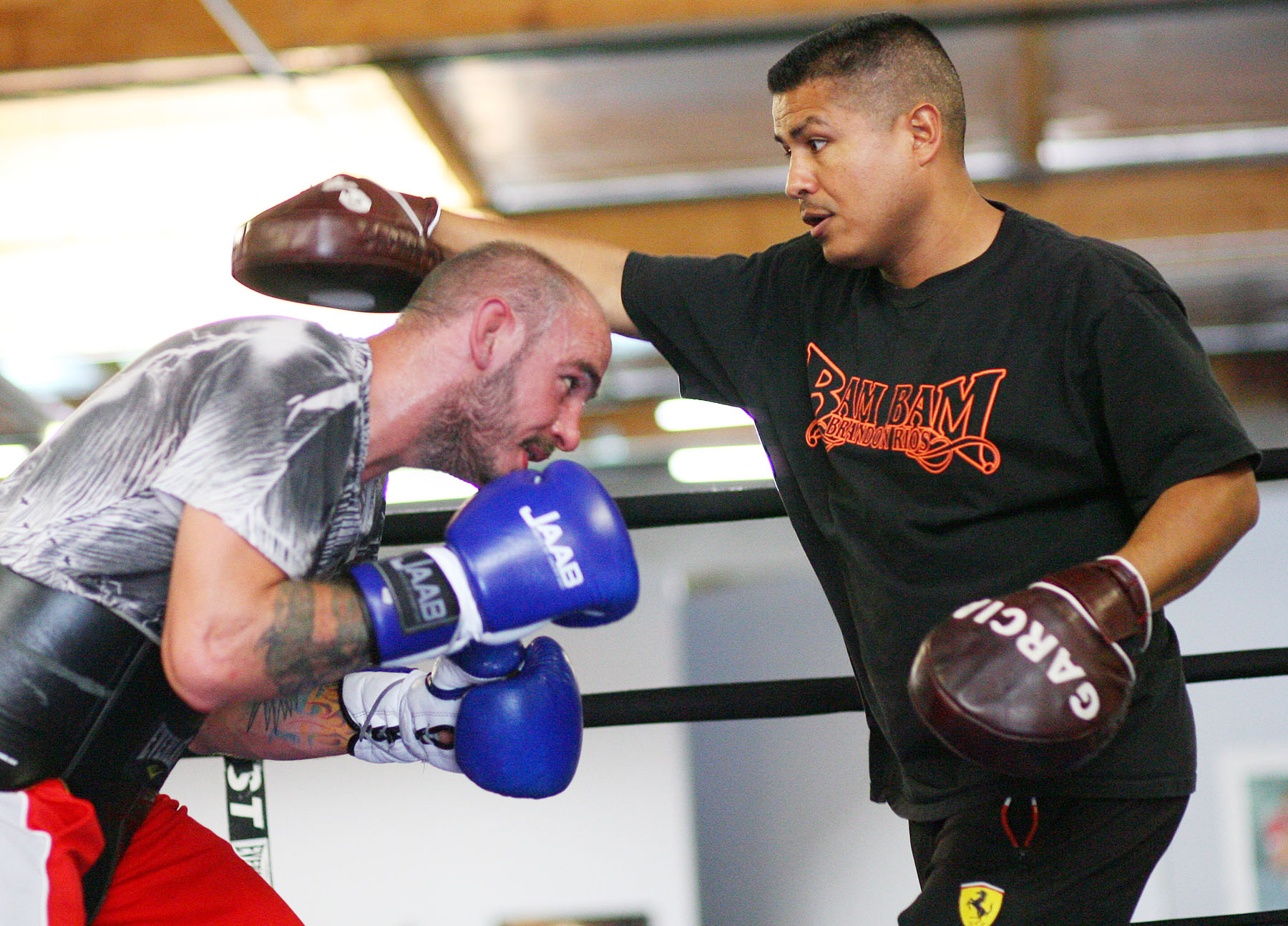 In what was almost a unanimous vote by ThaBoxingVoice.com staff, Robert Garcia is the 2012 trainer of the year.  Garcia has had major success in 2012 with his ever growing number of boxers in his stable. Garcia has led our fighter of the year, Nonito Donaire to a 4-0 record, moving up in weight and picking up two alphabet titles in the Super Bantamweight division in the process.  Garcia played a vital role in reminding Donaire not to always look for the spectacular knockout but to rely on his speed and boxing skill when dealing with opponents who didn’t come to win, but came to survive

Garcia is also the head trainer of one of the most exciting fighters in the world in Brandon Rios. Rios had two wins in 2012, one in controversial fashion over Richard Abril, where Rios struggled to make weight. It was also a fight where Rios’ original opponent Yuriorkis Gamboa backed out from. The Rios camp had also stated on our air that they had problems making weight because Rios had outgrown the lightweight division but were told by their handler’s that they had to continue to fight at 135 to keep his title in order land more lucrative fights against the Juan Manuel Marquez’ and the Manny Pacquiao’s of the world when he moved up.

With the lightweight division and title passed him, Garcia transitioned Rios with his move from 135-140 against what Rios called the ‘baddest motherfuck*r’ at 140 at the time, Mike Alvarado. In a fight that lived up to the hype, Rios stopped Alvarado in the 7th throwing his name back in the mix for big money fights in 2013.

Garcia was also called upon this year to try and rebuild fighters coming off losses, in particular Kelly Pavlik and Marcos Maidana. In 2012 Pavlik was 3-0 with most wins over limited opposition with an opportunity to take on Andre Ward in 2013. That bout has been scrapped due to Ward’s shoulder injury. Maidana was 2-0 this year since he decided to join the Robert Garcia Boxing academy and was involved in a fight of the year candidate this past September against Jesus Soto-Karass.

If boxing were a comic book, The Robert Garcia Boxing academy would be the equivalent to the Professor Xavier’s School of the Gifted in X-Men. One of those gifted fighters is his brother Mikey Garcia who is poised to have a breakout year in 2012. Touted for his patience and punching combinations, Mikey went 3-0 in 2012 with his best victory coming against Jonathan Barros. Garcia will take on Orlando Salido on the 19th of January in what could be an introduction of another star out of the Robert Garcia Boxing Academy.

His stable is ever growing and no one boxer or star is bigger than the other. In an interview with us earlier this year he stated, “Everyone competes with everyone and no one is allowed to slack off. No one in this gym wants to be known as the slacker. That’s what makes the stars better and that’s what makes the younger guys better because they all show up and want to be the best. At the end of the day it makes my job easier and makes me a better trainer.”

Garcia is in high demand and is usually a guy that’s mentioned when a high profile boxer wants to make a change in trainers. Look for Garcia to have successful 2013 as his stars come out and his prospects develop.

Nacho Beristain: My, what one big win can do to a year for you in boxing? Before December 8th, not many would have thought of Beristain as a candidate for trainer of the year. With one second left in the 6th round and one huge right hand, Beristain was picked by some by our staff as trainer of the year.

The knockout of Pacquiao not only vindicated Marquez of his past disappointments but also did the same for Beristain who himself was 0-2-1 against Freddie Roach in the Pacquiao-Marquez trilogy. In 2011, Beristain was partly blamed by some for Marquez backing off late in the fight, but all is forgotten after one huge right hand that changed plenty on the night of December 8th.

Angel Garcia: Garcia wrote a check that his son Danny Garcia cashed three times this year. Garcia was probably the most entertaining voice in the boxing world with his brash trash talking that included the famous, “I never met a Pakistani who could fight.” But what we did find out about Garcia is the love that he has for his son and what an excellent father-son training relationship they have. In a sport where the father-son/ trainer-fighter relationship doesn’t normally workout, Angel and Danny have had great success in 2012.

Hunter also has done good work with other members of his stable including Mike Dallas Jr., Brandon Gonzalez, and Karim Mayfield. Hunter also took on two challenges in 2012, revitalizing the careers of Amir Khan and Alfredo Angulo, along with becoming the new trainer of middleweight Fernando Guerrero and highly touted prospect Demetrius Andrade.

Others worthy of being mentioned: Ruben Garcia, Erik Brown, and Clemente Medina