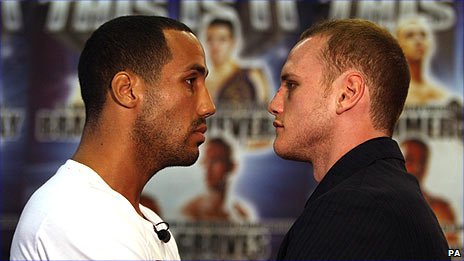 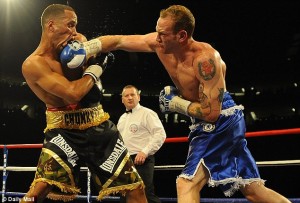 “I’ve discussed DeGale-Groves and you only have to listen to George Groves to know why it’s not happening. He says there’s no way he would do a 50-50, and I don’t know what planet he is on. DeGale is now the better fighter, and he’s the favourite in that fight with George Groves. James DeGale has jumped ten steps forward; George Groves has taken ten steps back because of average performances in his last two fights.”

That was a quote from the head of Matchroom Sports Eddie Hearn, from an article on sportlobster.com that was posted as a picture by super-middleweight contender George Groves(21-2, 16KO’s) on his Twitter account on February 2nd. The tweet initiated a back-and-forth exchange between the pair over the social media site with Groves initially labelling the above comments as ‘waffle’, before imploring Hearn in his next tweet to:

A not-so-subtitle swipe at Hearn Jr, who stepped into his position as top dog of the company by inheriting it from his father, Barry Hearn. Barry Hearn who himself made his name in boxing by managing a prime Chris Eubank in the early 90’s following a successful career snooker.

It is clear the mere suggestion that James DeGale (20-1, 14KO’s) and himself should be financially rewarded on an equal basis is utterly repugnant to Groves. However, Groves is the only man to hold a victory over DeGale from their first meeting in 2011.

While he obviously doesn’t like Hearn highlighting it for him. He does seem to have taken a few steps back in his last two fights; a points win Christopher Rebrasse in September and seventh round stoppage of Denis Douglin two months later.

He didn’t look bad in either outing; he just got clipped by shots you would expect him to avoid. His punches did not seem to detonate off his op 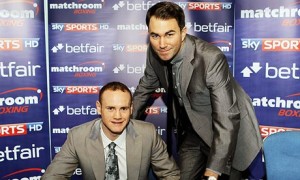 ponents faces like they used to. In all fairness, Groves’s relationship with trainer Paddy Fitzpatrick is still relatively fresh after he split with long-time coach Adam Booth just weeks before he met Carl Froch for the first time in November 2013. Maybe this is just a period of transition for him. But Hearn clearly didn’t want to address the reason for Groves perceived decline in a logical fashion and probably still had the ‘Daddy’ jibe on his mind when he said;

“ooh ooh I say! A sensible offer? You can wait! You need to wake up from May 31st kiddo’.

This is of course in reference to Froch’s stunning one-punch KO over Groves in their rematch at Wembley Arena last May, in front of about 80,000 people. Personal.

DeGale for his part has put on two venomous performances since he deserted his former promoters Hennessey Sports in favour of it’s larger and more glamorous Matchroom counterpart. He stopped Brandon Gonzales in four rounds on the undercard of Froch-Groves II before going one better by halting Marco Antonio Periban inside three, on the very same card where Groves beat Douglin in November.

On both occasions, he was decisive, accurate and showed the power previously lacking in his dextrous arsenal. He is probably itching to redeem the only blemish on his record in a rematch with Groves, which would be the most lucrative assignment for both men now that Carl Froch (33-2, 24KO’s) has one foot out of the sport.

Froch has just vacated the IBF version of his super-middleweight titles having been ordered to defend against his mandatory challenger or face being stripped. His mandatory was James DeGale, and Froch has chosen instead to pursue a big-money Las Vegas showdown with Julio Cesar Chavez Jr, or someone of his ilk, instead. Froch has not long left in the sport and is looking to tick every box he can before he hangs up his gloves for good. He has never fought in Vegas and Chavez offers much financial reward and little by way of technical efficiency.

With James DeGale ranked number one for the IBF and Groves occupying the same position for the WBC, it is plausible that both men could capture world titles before meeting each other. However, Groves would face a very tough test against WBC champ Anthony Dirrell and most likely have to travel to America for the privilege.

DeGale will have to contend with the number two contender in the IBF rankings for the vacant strap, which just so happens to be Andre Dirrell, big brother of Anthony. Both outings are far from foregone conclusions in the Brits’ favour, and if they both get beaten convincingly that leaves Groves-DeGale II dead in the water until they both rebuild with a string of solid wins, which could take another few years.

For Hearn, the best thing to do would be to have them fight again as soon as possible for the IBF title and give Andre Dirrell some step-aside money and promise him the winner. All the ingredients would then be present for the fight to really take on significance; a grudge match, a rematch, for the belt (and at huge venue hopefully). The advertisements would be on every twenty seconds in the UK for that one.

As big a payday as that would be for all parties, Groves’s aforementioned stance that DeGale does not deserve to be on the same financial footing as him may act as a rather significant roadblock to the proposed event. Groves has worked with Hearn in the past as well as his rival Frank Warren, but is now signed to the German powerhouse Saureland Promotion (who have had many past dealings with Matchroom), meaning he has no obligation, professional or otherwise, to bow down to Hearn in any respect.

“@EddieHearn doesn’t feed me. I don’t work for him. He’s an agent. He books venues. @SauerlandBros are my promoters.”

This evident needle hasn’t prevented Hearn and Groves from working together in the past and hopefully it doesn’t prohibit good fights in the future. Groves and his insistence on receiving the lion’s share of the purse, is parroting the viewpoint of fighters from the past who have insisted on the same thing; like when Roy Jones Jr told Bernard Hopkins, “60/40 you get yo ass kicked” when a rematch between them was being floated over HBO’s airwaves.

Solely from a fan’s perspective, I would prefer for Groves vs. DeGale II to be a unification fight. The fight would be so much more significant, and its participants would have so much more credibility if they both go into it having beaten two top-level Americans in The Dirrell Brothers. But from a promoter’s standpoint that is a big risk to take when a loss for either man jeopardises so much potential money. Groves doesn’t appear to be asking for anything unreasonable when demanding a bigger cut of the purse, and Hearn is arguably justified in saying that DeGale is the better fighter right now. This stand-off will most likely continue until a change in circumstance forces one or both parties to give some ground.