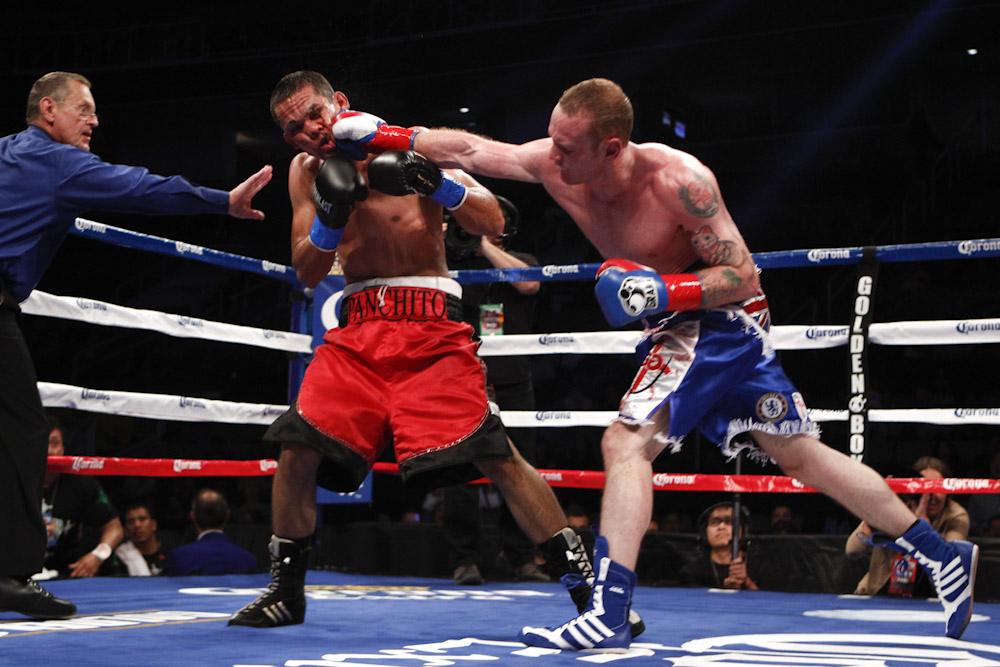 Last night British and Commonwealth champ George Groves (15-0) won an impressive 6th round KO over his Mexican opponent Francisco Sierra (25-6-1) at the HP Pavilion in front of the US crowd. He will be tremendously pleased with his exhibition to a more worldwide audience as it will put him on the radar of many he was not. He faced some adversity but dominated the action throughout and has certainly passed his test with flying colors.

Not only has he shown his willingness to step up in talent and go over the water to fight on foreign soil, he has shown a willingness to move up in weight and still retain his strength ad this bout was at the 170lb limit. His demonstration of his counter-punching ability and good all-round skills faced a slight hiccup when his right eye suffered a cut.

This visibly worried Groves, as instead of maintaining the style which he boxed at, he became slightly more urgent as he did not want the fight to get stopped so he stepped up, and began trading in an attempt to get his opponent out of there.

This came in the 6th round when a hook from a flurry put Sierra down. The opponent made the referee’s count but by then it was too late. Groves stepped in and continued and in a matter of seconds his corner had thrown in the towel and the fight was over.

Moving on from this Groves has some interesting options. Hopefully he will continue stepping up and not take a step back in his career which many do after an impressive performance. I will say I am much more confident about Groves’s career moving forward and he has convinced me he at least has a chance of becoming a title holder some point down the line.

Common opponents does not prove anything in practice, but I will speculate that only in November of last year, fellow rising star at 168lb and IBO champ Thomas Oosthuizen did not have as much of an easy ride putting the Mexican away. This fight between two undefeated up and comers would be great as the winner would be propelled into notability. Should this fight not happen soon then I don’t see why Groves should not take on a top ten contender. The British fans want to know if this guy is the real deal so why make them wait.