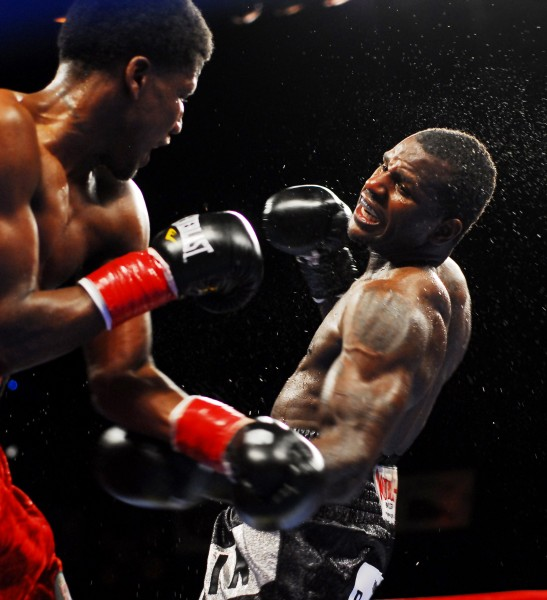 PROVIDENCE, R.I. (Jan. 14th, 2014) — Once again, “Hammerin'” Hank Lundy finds himself searching for an opponent, and, as usual, the Philadelphia slugger isn’t choosy about who he steps in the ring with.
“Whoever is out there, I’m ready,” said Lundy, currently ranked among the top 15 in the 140-pound division in two of boxing’s major sanctioning bodies, “but a lot of guys are scared to fight me right now.

“On any given day, I can end a fighter’s career, so what they’re doing now is running, but, at the end of the day, they’ll have to fight me.”

It’s been five months since Lundy’s last fight, an impressive, unanimous-decision win over Ajose Olusegun on ESPN’s “Friday Night Fights.” Lundy (23-3-1, 11 KOs) was so dominant he earned a shutout on one of the scorecards, snapping a two-fight losing streak and putting him back in the conversation among the elite 140-pounders.

Lundy, promoted by Classic Entertainment & Sports, was scheduled to face New Jersey’s Jeremy Bryan in October, but Bryan pulled out with a back injury and the card was ultimately postponed. Rumors of a nationally-televised showdown against unbeaten light welterweight Karim Mayfield surfaced in December, but the fight never happened and Lundy wound up closing out 2013 without a chance to build off the momentum from his big win over Olusegun.

“You know the game,” Lundy said with a laugh. “Jeremy Bryan, of course he pulled out. At the end of the day, he looked at who he was fighting. He was fighting ‘Hammerin” Hank Lundy, one of the top guys in the world. In his last few fights, he’d been getting knocked out [three times in his last six fights]. If he stepped in with me, it would’ve been the same result.

“The Mayfield fight was a done deal on our side, but, in reality, he knew what was going to happen to him. He wanted no parts of it. [Mayfield’s promoter] Top Rank said they wanted the fight. They told my manager [James Prince] to talk to their matchmaker [Brad Goodman]. We were told he was ready, then we never heard back.

“He tucked his tail like a [coward]. Scared money don’t make no money!”

Lundy’s list of targets reads like a who’s who in the 135- to 140-pound divisions, whether it’s undefeated Nebraska lightweight Terence Crawford, now 22-0 with 16 KOs; Mexican slugger Raymundo Beltran, who handed Lundy his second career loss in 2012; John Molina, who stopped Lundy on ESPN in 2010; or World Boxing Organization (WBO) lightweight champ Ricky Burns, who narrowly held on to his title in September in a controversial draw against Beltran.

Lundy would even consider stepping in with close friend and fellow Philadelphia fighter Zahir Raheem, who continued his comeback with a win over Bayan Jargal last weekend on ESPN.

“I’m real cool with his dad. We came up together,” Lundy said, “but this is a business, and, at the end of the day, I’d be ready to fight anyone who’s out there.”

The field is stacked, but so is Lundy’s resume.

“I’m ready. I never stop training,” he said. “I just finished putting in eight miles. Most people, when I fought Ajose, they thought they’d catch me on the sneak because I took the fight on short notice, but they didn’t know I was in camp with Adrien Broner. I’m always ready.”