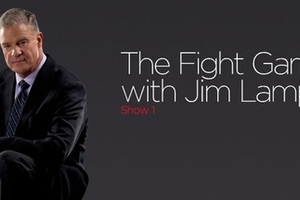 May 12, 2012 was the day HBO Sports debut The Fight Game with Jim Lampley. Many fans, including myself were excited for boxing to have a show with detail that would help exploit issues, and could also keep mainstream fans informed on the world of boxing, a sport that can confuse even the most hardcore follower.  Has the fight game live up to its potential or was it just words made to sound good in a press release?

Let’s start with the HBO press release that made the show seem like the perfect medicine for a sport that is in bad health on many levels.

THE FIGHT GAME WITH JIM LAMPLEY, a provocative, engaging and informative experience that delves into intriguing storylines, newsmakers and issues that are top-of-mind in boxing. Sound pretty freaking good doesn’t it.

Jim and his esteemed guests of broadcasters, writers, fighters, and promoters have done many of the things promised.

They’ve covered very important subjects that affect the sport dedicating quality time to the topic of performance enhancement drugs. Although late to the issue, the emphasis on boxing needing to address this very serious matter has been very well documented on the show.

It’s also given us a healthy dose of the ongoing politics of the sport that often deprive boxing fans from the matchups they crave. But when given the opportunity to challenge the issue the show fell short.

In the first episode Jim Lampley hit a home run with guests Bob Arum and Richard Schafer yet failed to push the envelope or follow up on anything with real substance. I suspect they would have given him a line of BS anyway but at least he could have backed them in to the ropes and let his hands go.

The Gatti list segment makes a lot of sense, highlighting action fighters makes it easy to appeal to mainstream and random sports fans who love a good scrap even if they don’t follow the sport closely or at all.

It’s clear that HBO, Jim, and Max have attempted to fill a void left from the guy who spoke from a fans perspective. A schtick that the hall of fame broadcaster Larry Merchant perfected and although to an extent needed, both have become more critical to the point of being out of their normal character.

The top pound for pound list from the last episode and Jim’s list on the last 3 shows is a prime example of this forced effort to bring the Merchant-esque point of view.

Merchant often played the role of devil’s advocate while Lampley was there to reel him in or offer a counter to his attack on a fighter that didn’t live up to his lofty expectations. Now it’s seems his treatment of Guillermo Rigondeaux has Larry written all over it.

Jim disagreed and pressed Max for having Rigondeaux in his top 5, which is worthy of a debate but not as worthy as challenging and following up more on Juan Manuel Marquez whom he didn’t have ahead of Nonito Donaire.

It took a loss by Nonito Donaire and a sup par performance by Sergio Martinez for Lampley, who had Marquez 4th on his list for 2 episodes in a row, to move Marquez to the 3rd spot stating he was coming off a career defining win. Rubbing salt in to a wound Jim had said a week after that career win and knockout of the year that he can’t be above 5th because he is “slightly diminished in terms of self protection”. In that same breath he took his fighter of the year award away from Marquez because of his involvement with Angel Hernandez, a proven cheater.

In the era of HGH one can’t be naive enough to raise one’s eyebrow when seeing the transformation of Marquez’s physique at welterweight. The problem is the HBO broadcast team including Lampley didn’t blink an eye as they witnessed Pacquiao’s rise in weight class while keeping his speed and power coupled with refusing to commit to random testing. All the while his own strength and conditioning coach admitted that Manny didn’t know what was in his “special shakes” that the renowned Alex Ariza was giving him.

Ignorance was show when only some credit was given to Mayweather for insisting on Olympic style test instead they collectively glossed over the glaring issues with comments about Money May using it as an excuse or negotiation tactic.

No matter if you’re neutral or take a side in the biggest causality of the Top Rank vs. Golden Boy Cold War, either way they were very late to this most serious issue with an eye solely focused on the bottom line.

Now, Jim credits only Donaire for his year round testing, which deserves the highest praise and attention, but with comments like “if you’re looking for a ray of hope or a light in the forest”, Jim is failing once again to mention that the biggest star in the sport Mayweather set a great standard at the time for the sport as well. Not to mention that something like year round testing is not unheard of in England.

Back to the P4P list, Max losses credibility placing Nonito Donaire and his conqueror Guillermo Rigondeaux above of the Mexican Legend Marquez in the top 5 pound for pound list.

Many thought Marquez won, along with other both the second and third encounters with Manny Pacquiao. Max used to stand up for Marquez ranking him behind only Floyd Mayweather for best pound for pound fighter.

His reasoning now to downgrade Marquez makes him come across as a company guy repeating what the voice in his the ear piece is telling him.

The explanation for placing “Dynamita” below the pair of elite world class fighters is a very weak argument claiming his struggles with Juan Diaz, who was a solid 135 pounder for few years, and Michael Katsidis penalizes him to the point of no return.

Rigondeaux beat an elite fighter in Donaire and Marquez knocked out the elite Manny Pacquiao but that’s still not enough for Max to have him above Nonito. He breezes by the fact that Guillermo struggled and was knocked down in a split decision win over Ricardo Cordova. Failing to mention he had been hurt in another fight causing him to be labeled chinny by some critics heading into the Donaire fight.

Even in Marquez’s struggles he still managed to knock both men out and oh by the way, scored a concussive KO punch that sent shock waves through the sport of a man who by most P4P lists was 2nd best or the best in the world.

Rigondeaux scores one great win and that’s apparently enough to put him in front of a 1st ballot hall of famer coming of a his best win in a career that has produced at least 55 wins 40 by knockout.

Donaire is coming off a loss, albeit a respectable loss yet Max still has nerve to place him in front of JMM. Max goes on to say that his list is who you think right now is Top 5, in the world of what have you done for us lately Marquez last victory speaks for loud and clear.

Whether you think Rigondeaux should be in the top 5 or not, Lampley does his best Merchant impression ranking ‘Rigo’ outside of top 5 due to style alone.

Lampley and HBO are ready to pass the Middleweight division to the freight train of action and activity Gennady Golovkin. Golovkin dispatching Matthew Macklin with a perfectly landed left hook to the body is reason enough for HBO to hand over the crown without a fight by the king.

Jim goes on a montage of Martinez being knocked down and bloodied to prove his point that Sergio is done and he never was a true middleweight consistently having to face bigger opponents. That point is very true but it’s a slap in the face to show almost all highlights of him struggling without showing how he won those fights.

For a company in HBO, whom was not interested in Sergio for the long term until that frightening 2nd round KO of Paul Williams, the least they could do is give just due to the now aging and injured but still king of the 160 pound division.

There is and has to be, understandably, life after Marquez and Martinez for HBO but there is no need to verbally kick them on the way out of the still propped open door.

I agree with Lampley’s take on the Broner/Malignaggi pre hype pressers being out of line when the topic of a shared female was brought to the surface. He took shots at Showtime which is fair yet failed to mention that the broadcast team and Richard Schafer raised their voice in disapproval on the subject.

Should HBO take some blame or does Showtime get’s all the blame? They help create and mold Broner’s career allowing him to follow in the footsteps of heal often repeating Floyd Mayweather’s lines?  Broner took it to a different level than just playing the bad guy. One wonders if or what HBO would do different if the network would have bought that fight?

Jim, Max, Kevin Iole, and Chris Mannix all gave their take on the blockbuster deal that Showtime signed with Floyd Mayweather. Most of it was on point and covered many angles for short and long term repercussions.

In the last episode Lampley was still shocked that Mayweather signed to fight with Canelo Alvarez.

Chris Mannix seemed very confident that Floyd didn’t want this fight otherwise he would have put Canelo on his undercard this last May and build the fight in a traditional way. Failing to mention Mayweather had forked out money in the past, a large sum in fact for Canelo to face Mosley on a PPV undercard along with putting him on 2 other undercard’s making his point hollow.

Mannix didn’t give detail about Canelo needing a signed contract to be on the undercard something that is very tricky in boxing. His fight with Trout was already very tight and if the decision turned out to be even more debatable that could have put Floyd and Golden Boy in a strange spot with many fans questioning Canelo being a worthy opponent and may have affected the bottom line.

The shows format comes across as informative yes, but provocative, engaging, or even offering any type of experience…no. It has passed the basic test of being a show that is better than what we had which was nothing.

On the surface it has been solid for a casual fan to be more informed or interested and has a foundation of potential to build upon.

For the hardcore fans it takes only a little digging under the surface to see major flaws and some over the top bias, something Jim touts it isn’t.

Showtime and Golden Boy bias has reared its head but they have shown footage and talked about some other fighters that fight on the NBC sports network.

I can’t blame Showtime for not giving them footage anymore just like I can see why HBO has structured the show the way they have.

The fight game is a vehicle for HBO to inform, write or rewrite recent history, and shape current events in the sport today how they (want you) see it.