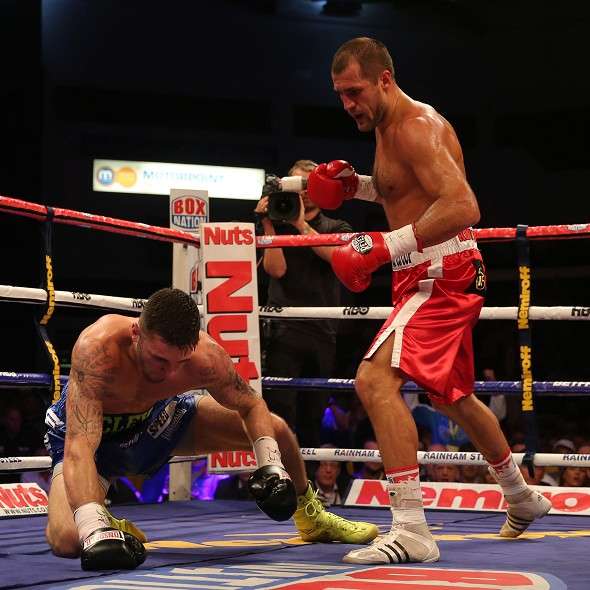 HBO’s hit late-night boxing franchise returns for an all-action doubleheader when HBO BOXING AFTER DARK: SERGEY KOVALEV VS. CEDRIC AGNEW AND KARIM MAYFIELD VS. THOMAS DULORME is seen SATURDAY, MARCH 29 at 10:00 p.m. (live ET/tape-delayed PT) from the Adrian Phillips Ballroom at Boardwalk Hall in Atlantic City, exclusively on HBO. The HBO Sports team will be ringside for the event, which will be available in HDTV, closed-captioned for the hearing-impaired and presented in Spanish on HBO Latino.

In the 12-round main event, Russian Sergey Kovalev (23-0, 21 KOs) defends his light heavyweight crown against Chicago’s Cedric Agnew (26-0, 13 KOs). Surging to the top of the 175-pound division in powerhouse fashion, the undefeated Kovalev, 30, knocked out his last six opponents in four rounds or fewer, most recently defeating top contender Ismayl Sillakh on HBO in November. Fans expect another remarkable display of power from Kovalev, who now calls Ft. Lauderdale, Fla., home.

A formidable challenger in his own right, the undefeated Agnew, 27, has taken the competition the distance in each of his last four bouts. He turned in a convincing performance in his most recent outing, an April 2013 contest against Yusaf Mack, earning a shot at a major title in his HBO debut.

The evening opens with a junior welterweight matchup expected to thrill, as San Francisco’s Karim Mayfield (18-0-1, 11 KOs) and Thomas Dulorme (20-1, 14 KOs) of Carolina, Puerto Rico, meet for a scheduled ten-round, 140-pound bout. The undefeated 33-year-old Mayfield knocked out Christopher Fernandez in eight rounds in his previous bout last September. Making his HBO debut in 2012 with a ten-round drubbing of rugged veteran Mauricio Herrera for a unanimous decision victory, Mayfield expects to shine in his first trip to Atlantic City.

In his only previous HBO appearance, Dulorme, 24, fell to Luis Carlos Abregu in the seventh round of their 2012 title bout, despite a game performance. Since then, the highly-valued prospect has scored two knockouts and two decisions to go undefeated in 2013. This will be Dulorme’s second visit to Boardwalk Hall.