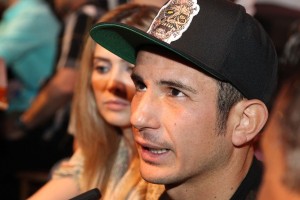 Light-welterweight Mauricio Herrera (21-5, 7KO’s) has a professional record that belies his undeniable talent. He could conceivably have worn a few of the 140 lb. titles already were it not for a highly debatable decision loss against Danny Garcia early in 2014.

His most recent ‘defeat’ came in a similar fashion against the young undefeated prospect Jose Benavidez last December. It seems the 35-year-old Californian cannot get a break.

His will next appear in Los Angeles on July 11th in a 10-round bout against ‘Hammerin’’ Hank Lundy (25-4-1, 12KO’s), who is looking to rebuild as well after a split decision loss to Thomas Dulorme, also in December.

Lundy is a temperamental, rambunctious character who does not represent a walk-over for Herrera. He has come up on the short end against higher-level opposition such as Ray Beltran and Viktor Postol, but his resume is comparable to Herrera’s, which bears a number of dangerous opponents besides those mentioned above, like Ruslan Provodnikov and a prime Mike Alvarado.

This will be a meeting of two capable, experienced pros who are looking to squeeze their way back into the upper tier of the division, and Herrera told World Boxing News that he already has two names in mind after a presumably successful night’s work against Lundy.

“I only want to fight top names. I want Lucas Matthysse and Lamont Peterson.

“Those are two fights we can consider if I can’t get other big names as I consider them big names too. Those fights would be awesome as before and would draw a big crowd.”

Herrera may prefer to take a lucrative rematch against Danny Garcia, but he has since moved on to the welterweight division given his consistent increase in weight over his last few fights.

However, Herrera could well follow him on the same path if a good enough opportunity presents itself.

“I would even move up in weight if I can get the big names to fight at 140, but first, I must beat Lundy.”

In a recent appearance on Tha Boxing Voice’s twice weekly podcast, Herrera said he may consider quitting the sport if another decision goes against him in the manner of the Garcia and Benavidez fights.

For whatever reason, the judges on both of those nights saw something that a lot of fans watching on TV didn’t. It wasn’t the first time, and until the judging criteria is adjusted, it will not be the last.

Herrera is justified in feeling short-changed by his circumstances, and it would be nice to see a man who turned professional late at the age of 27 have his talent confirmed by winning one of the major world titles.

Hank Lundy is the first obstacle on that path.