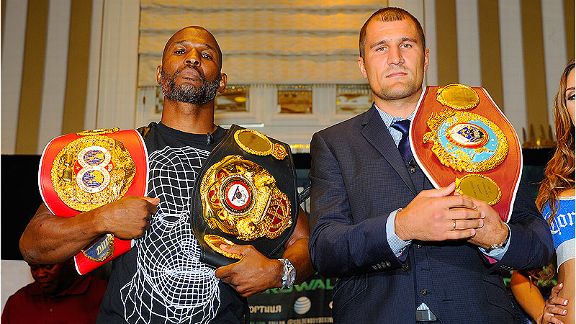 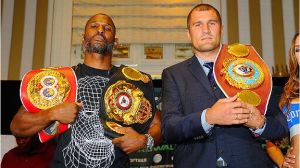 ATLANTIC CITY (November 3, 2014) – Months of grueling training and countless hours of preparation have led to arguably the most anticipated fight of 2014 featuring Bernard “The Alien” Hopkins taking on Sergey “Krusher” Kovalev. This Saturday, Nov. 8 fight fans will finally get a chance to see what all the talk is about when the light heavyweight champions meet at Boardwalk Hall in Atlantic City, NJ live on HBO World Championship Boxing®.

However, before fight night arrives, please take a look back at some of the noteworthy words exchanged between the Hopkins and Kovalev camps.

“I’ve been in the game for almost three decades. I look for more of what a guy brings to a gunfight other than bullets…The sweet science is not based on only one thing you can do particularly well.

“There’s no fighter I wouldn’t put my record up against. In this era, in any class. I put the work in to have the track record and be taken seriously.”

“Come November 8 on HBO you get to watch artwork. You’re watching Miles Davis and Louis Armstrong with gloves on.

“I have the same thoughts on Kovalev that most people here do. He’s a dangerous puncher, he has an over 90 percent knockout rate and anyone who fights this guy has the opportunity to not be the same. We won’t take anything away from this guy because he’s real, but on Nov. 9 we don’t want anyone saying what they aren’t saying now.

“Kovalev is a threat to anybody. It won’t be an easy fight, even if it looks easy to you. I don’t just have to beat the man, but I have to beat a lot of people. They’re either going to watch me win or watch me lose, and I don’t mind playing that game. I don’t believe in luck, I believe in whoever brings the best of themselves and whoever sacrifices to be victorious will win.

“This is nothing to sneeze at, that’s the main thing, but just being able to be around as long as I’ve been and still fresh as a daisy, I believe, and I’ll prove it November 8th, there’s no definition really behind it. Just enjoy it, understand it, and realize that you might not be alive to see it again.”

“I always have bullets in my arsenal. My hands are my weapons. It’s my weapon in the ring. Hopkins thinks that I only have two bullets but I will bring some more.

“It is not easy to overlook Hopkins. I think when he’s 60 years old he’ll be in the same condition. He’s an alien, but I have to send him to the moon and maybe from there he’ll go by himself to Mars.

“I don’t really understand what Bernard is saying. It doesn’t matter what he says. Even if I understood, I wouldn’t care. I don’t worry about him. I’ll go into the ring and do my job.

“He has pushed me little bit. I want to do everything a little bit faster and a little bit rushed. I already can’t wait for this day to come. I have patience and there is nothing I can do but wait for November 8 to get two more titles and go back and give this victory to my wife and my son.

“Being the best middleweight in the history of this sport, with 20 defenses and now to be 49 at light heavyweight, he’s still going strong. I’m now convinced he is an Alien.

“People respect the fact that at 49-years-old, he’s still going strong. There’s no sign of him slowing down. He’s getting faster, he’s getting stronger and he has more energy. He’s toying with young fighters, half his age. For Hopkins it’s starts outside the ring, he breaks you.

“At 49-years-old, being the oldest champion in any sport, he deserves tons of respect. The fact that he’s facing the ‘Krusher,’ is just another of the many dangerous fighters that Bernard has faced.

“At this point. Hopkins is already in the Hall of Fame, he’s already going to be talked about as one of the greats. So he doesn’t have that added pressure of trying to prove himself. I think people already have the utmost respect for him.

“I believe that Hopkins focuses not on what he’s going to do physically, but on what he can do to get his opponent out of their comfort zone and what combinations does he not expect from me. I wouldn’t say he’s awkward, but he knows how to offset you.”

“This fight is going to be the most anticipated fight of 2014. It’s so much fun putting together a fight like this that everyone wants to see. It’s great to see the excitement level and the anticipation. You can feel it in the air.

“Bernard’s never been stopped.  Sergey has knocked out just about everyone he’s fought.  It is a tremendous, compelling fight.

“This is going to be a tremendous event. It’s one of those fights that when the bell rings you really won’t know what is going to happen. It’s not about finding out who’s best, its about who is going to win the fight, because both are great.

“This is what boxing is supposed to be and we look forward to November 8.

“The first person I thought of when I saw Sergey Kovalev in the ring was Ray Leonard. I saw the look in his eye and I could tell he was different. I believe he is the most electrifying boxer in the world of boxing and he will prove it on November 8.”