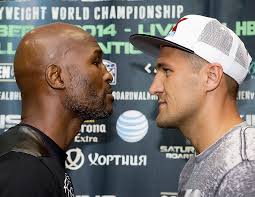 On Saturday night, HBO will be live from Atlantic City, as two of the top three light heavyweight boxers in the world will be on display. Golden Boy Promotions presents champion vs champion as “The Alien”, Bernard “The Executioner” Hopkins will be squaring off against Sergey “Krusher” Kovalev in a bout for the WBO and IBF World Light Heavyweight Titles, as well as the WBA Super World Light Heavyweight Title. This unification fight will give great backing to the winner of this fight being touted as the best light heavyweight in the world, although Adonis Stevenson would have something to say about that.

The future hall of famer, Bernard Hopkins just continues to keep going. He now stands with a record of 55-6-2 with 32 KOs, but the thing that sets him apart from everyone else is his resume of work through his long and extremely successful career. He successfully defended his IBF middleweight title for 19 defenses which lasted over an 11 year span. He may not have won every fight, but when you mention the people he has fought, it’s unmatched by anyone in the sport.

Just to name a few on his fight resume: Keith Holmes, William Joppy, Chad Dawson, and Tavoris Cloud, but then you get to the big boys: Jean Pascal twice, Jermain Taylor twice, Roy Jones Jr. twice, Kelly Pavlik, Joe Calzaghe, Antonio Tarver, Winky Wright, Oscar De La Hoya, and arguably the biggest win of his career, Felix Trinidad. The people that I haven’t even mentioned on his fight list are as good as some of the total resumes of some of the boxers that are hyped up in the media today.

Hopkins is now 49 years old and has been looked at as a machine. He continues to bully his way through boxer after boxer, however, other than Cloud at the start of last year, his last dominate win was against a Roy Jones Jr. in 2010 who was a shell of himself. Besides Cloud and Pascal, which were both extremely close fights, his last dominant win over a good opponent at that time was Kelly Pavlik all the way back in 2008. The question must be asked if he still has it. Did he dominant Murat and Shumenov? Yes he did, but he was supposed to, neither of those two are close to the level of this opponent.

When I mentioned that Hopkins has fighters on his fight list that I didn’t even mention that are as good as other hyped up fighters resumes, I was not talking about Sergey Kovalev. However, the statement can be taken to mean that. Kovalev will be stepping into the ring with an undefeated record of 25-0-1 with 23 KOs. He has been a beast so far, but he hasn’t faced great competition as of yet with his best wins coming against Blake Caparello, Cornelius White, Nathan Cleverly, and Cedric Agnew, not exactly murderer’s row.

Kovalev wants that big name on his resume. He never ran from big name opponents and it has been more of the other way around. He has called out and bashed Adonis Stevenson numerous times for avoiding a fight with him. His power is for real and he isn’t afraid of Hopkins and his legendary aura. It will make for a very interesting in ring environment as the last person who didn’t really seem to care about Hopkins status was Chad Dawson, before Dawson’s career seemed to fall off a cliff. I expect Kovalev to go all out and fight for what he wants to be known as, the best light heavyweight boxer in the world. Is this his time?

The expression on Kovalev’s face will be the true showing of who I think will win this fight. This will be the biggest fight of his career and the most people watching him all at one. If he looks nervous or a little wide-eyed I think Bernard will do his usual thing, but if he has a true game face on I think his attitude and strength could actually frustrate and overpower Hopkins, who usually likes to dictate the pace and the style of the fight. Since I can’t see Kovalev’s expression before this article goes out, I’m going to pick Kovalev by 7th round stoppage. And yes, I know that Hopkins has never been stopped in his career, and I don’t think he’ll be KO’d, but I do think Kovalev will deliver enough damage that the ref stops this.

This fight should definitively tell you one of two things. Bernard Hopkins may really be an alien and he somewhat exposes Kovalev as a hard puncher who hasn’t really faced any competition and maybe a bit overrated. On the other hand, Kovalev may prove he is really a monster while showing that Hopkins may finally be showing his age. Either way, to me, this was a 50-50 fight from the day it was made all the way to me writing this article right now. I can make an argument for either side winning this fight, so I don’t think there is a right answer until we actually see the fight and what a great fight it should be. This is a fight that everyone should really enjoy.