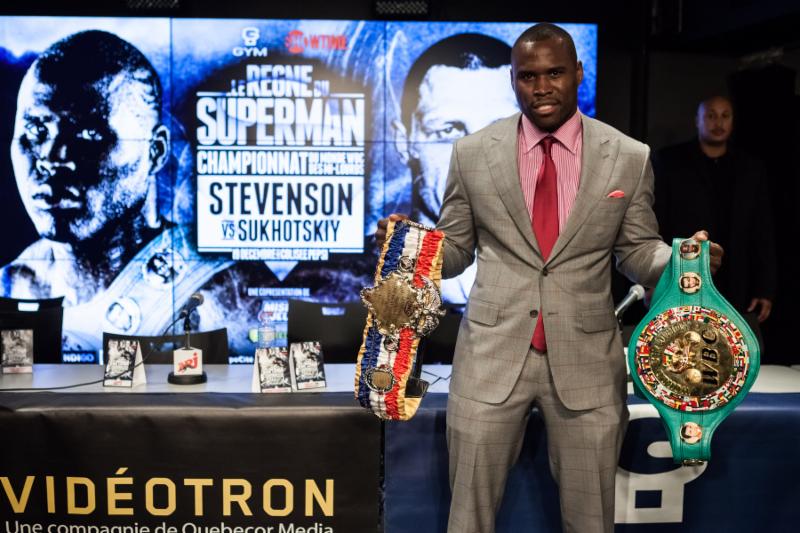 Popular, hard-hitting WBC and The Ring Magazine Light Heavyweight World Champion Adonis “Superman” Stevenson (24-1, 20 KOs), of Montreal, will defend against top-10 contender Dmitry “The Hunter” Sukhotskiy (22-2, 16 KOs) of Russia, in the main event of a SHOWTIME BOXING: Special Edition® quadrupleheader Friday, Dec. 19, live on SHOWTIME®(9 p.m. ET/PT, delayed on the West Coast) from the Pepsi Coliseum in Quebec City, it was formally announced Wednesday at a jam-packed press conference at NRJ Bell Media building in Montreal.

The final SHOWTIME boxing telecast of the year, presented by Groupe Yvon Michel (GYM) in association with Mise-O-Jeu and Videotron, will include three other fights: former world title challenger and super middleweight contender Andre Dirrell (23-1, 16 KOs), of Flint, Mich., will box an opponent to be announced in the co-feature, Kevin Bizier (23-1, 16 KOs), of Quebec, will rematch Canadian-based Romanian Jo Jo Dan (33-2, 18 KOs), in an IBF welterweight elimination fight and undefeated contender and two-time Russian Olympian Artur Beterbiev (6-0, 6 KOs) will face fellow unbeaten Jeff Page Jr. (15-0, 10 KOs) of Andover, Kan., in a 10-round light heavyweight match.

Here’s what Stevenson, Bizier, Dan, Beterbiev and Page had to say on Wednesday:

“My hand has healed from the injury when I fought Fonfara. I’m healthy and I’m ready to go.

“Going 12 rounds was a good experience for me. I train for 12 rounds in the gym. Sometimes it’s good to go the distance and get the experience.

“Everybody brings their A-game because I’m the champ.

“I know I’m the king of the light heavyweight division and I know that everyone wants to take my belt. I’m going to train very hard.

“Sukhotskiy is a tough guy and he’s hoping to surprise me. I’ll prepare, my hands will be perfect and it will be a short night on SHOWTIME.”

“I’m hoping to fight with Kell Brook, but I’m concentrating 100 percent on the fight with Kevin Bizier. I’ve been waiting for this fight since I started boxing.

“I know he’s learned some things and has more experience since our first fight. But I also know him better now than when we first fought, so I think it’s going to be an exciting fight.

“If the knockout comes, it’s comes, but I always prepare for 12 rounds. If the chance is there, I won’t miss it. But that doesn’t mean we aren’t preparing for 12 rounds.

“I train 100 percent and I’m sure he’ll be in the best shape of his life. We’re looking to make the fight of the year in Quebec.”

“If I want to win the world championship then I need to prepare for the best and the toughest fight of my life against [Jo Jo] Dan.

“It puts a little more pressure knowing that I could fight for a title if I win in December. But I’m focused on Dan and no one else. I’m just focusing on boxing. I’m not worried about stopping him.

“I’m not worried about getting another knockout. It all depends on the strategy of the fight. I’m going to fight until the last round.

“With [Tavoris] Cloud I was preparing for 12 rounds and I could never have predicted that I would only box for four minutes. I was just doing my job and that’s what happened.

“I’m going to be more motivated for this fight because he’s undefeated. Every fight I go in the ring thinking that I’ve already lost to my opponent before. That way I won’t take my opponent lightly.

“The amateur career helped and I hope it will help me for the rest of my life. But at the same time I need to progress. I have a lot to learn in professional boxing and I’m looking forward to it.”

“No, I don’t think he’s overrated. He had a great amateur background and he went to the Olympics twice. He has beaten a lot of good fighters and he just beat Tavoris Cloud, so I think he’s a tough opponent.

“I have great hand speed and great footwork, but I know I can’t run from him like everyone else has. I’m ready to exchange – I have great power myself.

“I think him and his team are underestimating me, but I’m going to use that to my advantage. I’m going to come in and show him right away that I’m there to win, that I’m not an opponent.

“Being an underdog is absolutely a motivator for me. Everybody back home is going to be watching. If I win this fight big things are going to start happening for me and my team. Everyone will know who I am.

“I think my experience helps. He’s had a lot of amateur fights, but amateur and pro fights are a lot different. I’ve trained with a lot guys – I’ve been to Vegas, I’ve been to Chicago – and I’m getting ready to go to Big Bear. I have a lot of experience and I plan to use it.

“I train for knockouts but I’m ready to 10 rounds.”