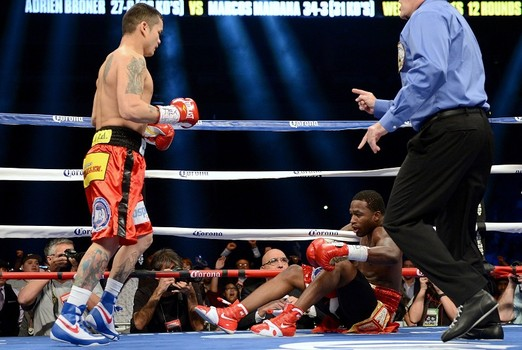 Adrien Broner learned Saturday night that boxing is a tough old sport and that if he wants to be remembered as a great he will have to work harder and truly push his abilities to the limit.

Broner aged 24 headed into the fight as a 3 division world champion and with huge hype surrounding him. Broner was being labelled as the apparent heir to Floyd Mayweather’s throne of pound for pound king.

A flashy fighter with brilliant speed, movement and good power Broner has forged an impressive reputation for himself and had done everything right in his professional career before this fight. Coming in with a highly impressive undefeated record of 27 wins 0 losses and 0 draws including 22 knock outs, Broner was the big favourite against the heavy-hitting Argentine Marcos Maidana.

Maidana aged 30 is a former light-welterweight world champion and has a fearsome reputation as a big puncher with 31 knock-outs in his 34 wins before the fight. Maidana has always been regarded as a tough fighter with great punch power but someone who technically very good fighters can overcome.

The fight was expected to be a tough one for both men with the real clash in styles but the general consensus was that Broner would  prove to be too classy for Maidana. This was to prove untrue.

The first round was excellent and was to foreshadow the rest of the fight. Maidana started at a frenetic pace looking to attack straight away and unload some heavy shots on Broner. Maidana landed several big shots on Broner within the first round and Broner clearly felt the effects of the shots and looked hurt. Maidana pushed Broner back onto the ropes and really let his hands go. He threw his shots at a much higher rate than Broner throughout the whole fight. The first round was absolutely dominated by Maidana and sent out a message to Broner that this was going to be a really tough test for him.

The 2nd round started off where the 2nd ended with Maidana landing a couple of big left-hooks and flooring Broner. This was the first time that Broner had been knocked down in his career and he looked in real trouble. He was clearly shaken and it looked as though he was there for the taking. Maidana once more forced Broner onto the ropes and threw punches at will. Broner landed a decent 1,2 but he was being bullied by the Argentine with Maidana landing another good right hand near the end of the round.

In the 4th Maidana continued his good work to the body and continued to out-work Broner. He was fighting with real determination and at this point things were looking bad for the unbeaten Broner.

The 5th round started very positively with both men landing shots successfully with Broner finally trying to come forward and force Maidana onto the back foot. Broner landed a good 3 punch combination and some good left-hooks in a very entertaining round. Broner was warned for pushing and Maidana continued target the body of Broner with real success.

The 6th was another tough round with Broner starting to look a bit more comfortable and using his hand-speed to great effect on occasions. Maidana was being forced to fight on the back foot at times but was still landing his left-hook with real intent.

The 7th round was an indication of just what a tough and rough fight was taking place with both fighters landing their shots. A fascinating statistic was revealed part way through the round that Maidana had thrown over 500 punches in the fight so far in comparison to about 200 from Broner. Maidana was by far the busier fighter and looked determined to do whatever he had to do to win. Broner was finding more rhythm though and starting to look better.

In the 8th round both men were landing well with Maidana continuing to land his overhand right before landing another left-hook. The shot floored Broner for the second time in the fight and he looked to be in real danger. Broner was able to hold onto Maidana and prevent him from landing the big shots for a while. Whilst holding onto Maidana he was to receive an intentional head butt. Broner backed off and really made the most of the opportunity. He rolled onto the floor and really milked the opportunity for all it was worth. This allowed Broner to recompose himself and find his bearings before the referee deducted a point from Maidana for the head butt.

The 9th was a case of more dominance from Maidana with him pressing forward and Broner holding on when up close. Another left-hood staggered Broner who was by now barely throwing a shot in return. Broner did well to get through the round and deserves a lot of credit for gritting through and not giving in.

The 10th was yet another tough round with both men trying to assert control but with Maidana doing so much more work than Broner. At the end of the round Broner’s corner told him that he needed a knock out to win the fight and retain his title

The 11th once again began with Maidana looking to up the pace but Broner was himself trying to up the intensity and pile on the pressure. Maidana landed more big shots on the ropes before Broner landed a big punch just after the bell. Maidana seemed to have been bothered by the punch and could have made for a match-changer.

The 12th and final round proved what Broner was made of. He came forward landing good shots and backing Maidana up on the ropes and looking the aggressor for a change. Maidana fought back and did some of his own good work and both men went toe to toe. The fight ended much in the same fashion in which it started with real pace.

It had been a brilliant fight in which both men had moments of success but one in which Maidana was able to impose his style of fighting on. It was fought at a furious pace and that is credit to both men.

Broner had been unable to impose his slick, slower paced style on the fight and was bullied in much of the fight. Rightly the judges scored the fight in favour of Maidana on the scores of 115-110, 116-109 and 117-109.

Broner left the ring immediately following the decision and looked like a broken man. He was distraught as it hit home that he had lost his title and his unbeaten record. Broner is a controversial character and he is widely unpopular with the boxing fans but see objects being thrown at him from the crowd as he left the arena was not nice. Broner had fought hard but came up short and he deserves credit for having the grit to survive in there and hear the final bell.

In terms of what’s next for each fighter it is unsure. Maidana is sure to get a big fight against another top name and fully deserves that after a brilliant display in this fight.

For Broner it is time to reassess. He wasn’t particularly convincing against Paulie Malignaggi last time out and was exposed in this fight. Is his body cut out for the welterweight division at this stage in his career? It is unsure and perhaps jumping up 2 weight divisions following his win over Gavin Rees has gotten the better of him.

Broner has unbelievable natural talent and if he really knuckles down and works hard than there is no doubt that he can be a great of the sport. He has all the needs to do so and I’m sure that this fight will actually improve him as a boxer. He will learn from his mistakes and come back stronger for it.

Broner will be devastated for losing his unbeaten streak and it will hurt but at the end of the day Maidana put up a fantastic display and deserved to win. He was beaten by the better man on the night but there is still so much to look forward to in the career of Adrien Broner