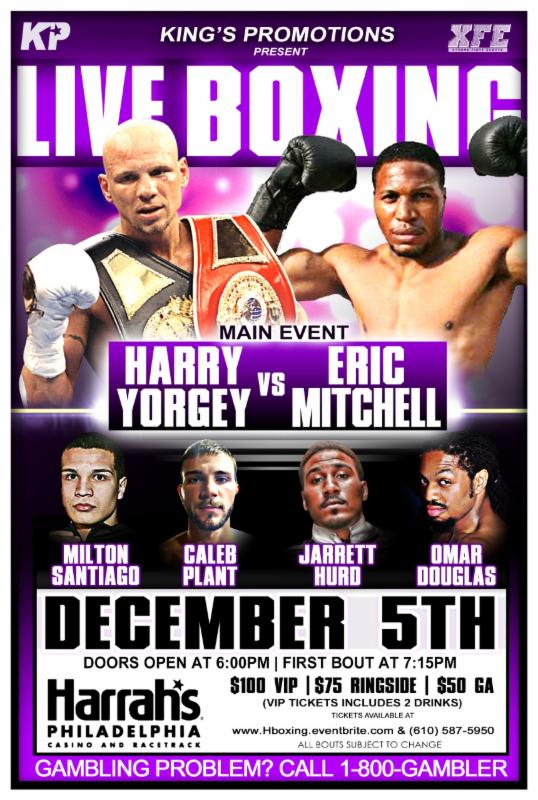 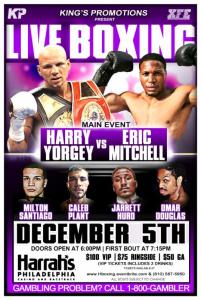 CHESTER, PA (December 3, 2014)- This Friday night at Harrahs Philadelphia, undefeated Jarrett Hurd will now take on Emmanuel Sanchez in the 8-round Main Middleweight main event.
The show is promoted by King’s Promotions and XFE.
Sanchez is a late replacement for Eric Mitchell.
Sanchez if Laredo, Texas has a record 5-1 with 1 knockout.
The 27 year-old already has defeated one undefeated opponent when he defeated Cesar Martinez (3-0).  In his last bout, he scored a 4-round unanimous decision over Egbert Reed on March 1.
Hurd of Accokeek, Maryland has a record of 13-0 with eight knockouts and will face his most experienced opponent.The 24 year-old began his career in 2012 and has wins over undefeated Thomas Baldwin (2-0-2) & Frank Gedeon (4-0-2). He also has a win over Chris Chatman.Hurd has stopped his two most recent opponents in the first round which includes his last bout when he took out Terry Cade on on November 1st in Washington, D.C.
In six round bouts:
Omar Douglas (12-0, 9 KO’s) of Wilmington, DE will take on Osnel Charles (10-11-1, 1 KO) of Atlantic City, NJ named in a Jr. Lightweight bout.
In four round bouts:
Milton Santiago Jr. (7-0, 3 KO’s) of  Philadelphia, PA will battle Travis Thompson (7-11-3, 3 KO’s) in a Lightweight tussle.
Caleb Plant (4-0, 3 KO’s) of Ashland City, TN will fight Daryl Gardner (2-4, 2 KO’s) of Spokane, WA.
In a Featherweight bout, Stephen Fulton (2-0, 1 KO) of Philadelphia will square off with Benjamin Burgos (2-9-1) of Mount Pocono, PA.
Earl Newman (2-0, 2 KO’s) of Brooklyn, NY will take part in a Cruiserweight bout against Jade Ealy (1-1, 1 KO) of Georgia.
Tickets are now on sale for $100 (VIP); $75 (Ringside) and $50 (General Admission) and can be purchased at the Harrahs Philadelphia Gift Shop; By calling King’s Promotions (610-587-5950) or www.Hboxing.eventbrite.com
Tweet