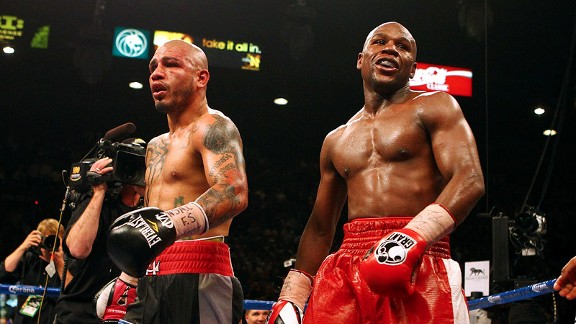 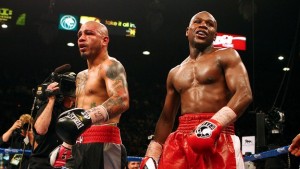 It has been rumored that Floyd Mayweather Jr. offered Miguel Cotto 40 million dollars for a rematch of their May 2012 – a fight that Mayweather won by unanimous decision, but it was a fairly competitive fight by Mayweather standards.

However, TheSweetScience.com is reporting that those rumors are false. Michael Woods of TSS spoke with Cotto’s advisor Gaby Penagaricano, who said there was “No truth to the rumor as to the offer for Floyd Mayweather rematch.”

Woods also asked for an update regarding the potential super fight between Cotto and Saul “Canelo” Alvarez.

Oscar De La Hoya recently tweeted that Canelo has “conceded on all demands including moving from 50/50 split” and that the “ball has been in Cotto’s hands for six weeks.”

Woods asked for Penagaricano’s reaction, to which he responded “We are still discussing the fight,” admitting there was no agreement as of yet.

Mayweather Jr. has recently stated that he is open to fighting Manny Pacquiao and there have been reports that negotiations are currently ongoing for the long-awaited showdown. It still seems unlikely that the fight will happen and Floyd is in an unfamiliar and somewhat awkward position because he has gotten the fans hopes up for the fight with Pacquiao, but if he ultimately opts to fight an opponent with a smaller degree of anticipation then it could backfire on him. That backlash could translate into poor PPV numbers – Mayweather’s PPV numbers have already been down in recent fights.

The problem for Floyd is that most people expect him to fight Amir Khan next, but Cotto-Canelo has a working date of May 2nd (Cinco de Mayo weekend), a date Floyd has owned for years, but if Cotto-Canelo is finalized then it has enough juice to knock Floyd off the date if he fights anyone else.

Khan won’t cut it for fans, and he is probably the best (realistic) opponent for Floyd. The reason that Cotto makes sense for Floyd is that he is the only opponent better than Khan, and the competitiveness of their first fight makes Cotto slightly less of a letdown to that of Pacquiao. Even if Mayweather-Cotto is not a blockbuster well then at least he takes back the Cinco de Mayo date by taking Cotto out of the equation for Canelo.

I think most fans would agree with De La Hoya that Cotto-Canelo gives a revived feeling to boxing’s most appealing mega fight. Obviously Mayweather-Pacquiao is the biggest money fight and most appealing for fight fans, but it is much more flawed from an aesthetic standpoint.

Mayweather-Pacquiao has been hyped so much that it doesn’t deserve our attention anymore, and it probably won’t be very entertaining or competitive. But Cotto-Canelo could provide big time fireworks, the kind we should expect from a big time fights. It is also much more competitive, theoretically speaking.

No one would blame Cotto if he decided to fight Mayweather next, but it isn’t the fight fans want to see for either fighter.