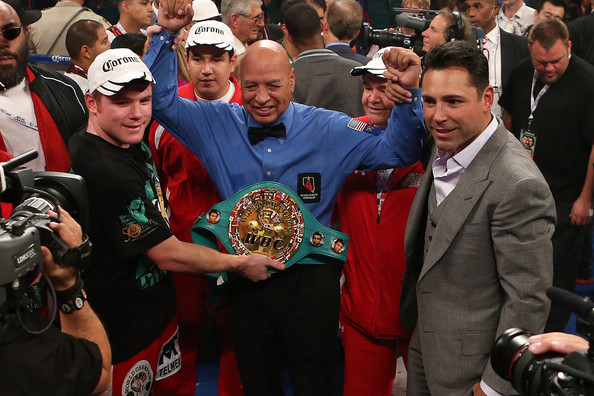 A few weeks ago Hall of Fame referee Joe Cortez called his last fight in the sport. His swan song fight was the main event of Showtime’s September 15th telecast between Saul “Canelo” Alvarez and Josesito Lopez. Cortez will go down as one of the all-time greats, but he’ll also be remembered by some as controversial. The sad part about the job of a referee is that it goes mostly unnoticed and even when the job is well done it usually isn’t remembered or acknowledged. However, should a referee make a questionable it haunts them for the rest of their career.

Cortez’s legacy is cemented and I think from an overall standpoint the positives of a 30 plus year career will outweigh the negatives.

That isn’t good enough for Cortez. The esteemed former ref isn’t the typical lay out to pastor-golf playing-Florida living retiree. It seems now that his career as a ref is over Cortez will focus his efforts on a new venture in boxing. This time instead of helping boxing one fight at a time Cortez will try to take a role that allows him to change boxing as a whole, and for the better.

Cortez discussed his new found role in boxing with Thaboxingvoice.com and admitted that his decision to retire was only a matter of time. It seems as though Cortez realized he could do more for boxing without the bowtie and shiny shoes.

“I was looking to retire over a year ago. When I got inducted into the International Boxing Hall of Fame, I said to myself ‘I think it’s about time’ because there is so much more I want to do. I want to do a lot of more things for the betterment of boxing,” Cortez said on ThaBoxingVoice.com’s Sunday podcast.

The strides Cortez hopes to make are subtle and extreme at the same time. He explained the rationality that led to his epiphany.

“I want to change the [point of view] of the judges. The judges at the fights have the worst seat in the house, as far as I’m concerned. The referees, the ropes, the lights and the fighters themselves — the angles that the fighters are standing — are blocking the judge’s view.  Judges cannot see if the punch landed clearly or not, there’s a lot of obstruction on the judges. We need something to stop all these controversial decisions.”

Cortez believes that the lack of clear visual perception of judges combined with lack of knowledge from fans has been what has caused the uproar in finger pointing at boxing officials.

“I think our judges are as fair and as honest as they come. I’m tired of listening to the media and the fans knocking our judges, saying that they’re ‘blind, incompetent, too old, and corrupt, I hate to hear that. People don’t realize the damage they can do mentally, not only to the judges, but to the family members as well when they knock these officials.”

“The viewers at home are able to see the angles of the fighters clearly. So the viewers are saying ‘what did the judges see? They missed everything, what were they watching?’ but the judges aren’t watching what the viewers are watching because they get better views,” Cortez said.

The development that Cortez has made is brilliant in its simplicity. It’s called the “Cortez 20/20 System” and it is basically a study on the angles and viewpoints available to judges in a fight. The experiment hopes to prove that the current point of view of judges is inefficient and can be bettered with an elevated view — much like that of tennis and volleyball officials.

“So I said ‘I’m going to do my own study.’ I got ladders and I put 3 judges 8ft above the ring apron and 3 judges at the lower level where they’re normally at. We did a 4 round exhibition with 2 fighters and me as a referee. I had 8 judges present from the amateur level and they had their [punch counters]. After the first round I asked the [judges whose view was above the ring] to tell me how many punches they missed — not how many that landed — and the top judges missed 1-3 punches. Then I asked the judges on the bottom [normal POV of judges] and they missed [anywhere from] 9 to 15 to 19.”

Cortez said that those discrepancies in numbers went on for 4 consecutive rounds. Essentially what Cortez’s study proved is that the judges with the elevated angle had a better perception of what was going on in the ring and the judges that had the normal viewpoint were only as in tuned to the fight as their limited angles would allow.

There should be little doubt in the proof of Cortez’s study, in fact, Cortez alluded to the fact that those who have seen the study first hand are incredibly enthusiastic about the prospects of the study and not just from a boxing standpoint — it seems that Cortez has had a positive reaction from the MMA crowd as well. However, the doubt I have stems from those who have the power to make changes. Cortez seems optimistic and that gives me enough hope in and of itself.

“Positioning is so important, not only for the referee, but for the judges as well and that’s why I came up with the Cortez 20/20 System,” Cortez said.

In order for this thing to gain any momentum it has to be backed, at least in theory, by the local commissions and sanction bodies. Cortez believes that if one State gets behind it then the rest will follow.

There are still some grey areas to me, I mean all I can imagine is a scaffold that hangs over the ring sitting 3 judges (You ever seen an ECW scaffold match from back in the day?). The only other thing I can imagine is something that would block the view of fans, which would be counterproductive in the end. Cortez insists that the apparatus he has engineered is easy enough for the judges to “climb” up and down from.

Still, it seems as though there are some concrete ideas surrounded by some good old fashion initiative. Cortez says he’s prepared to travel the country on his own dime in order to show the system to people of interests. More importantly, Cortez insists that money isn’t his driving point and will have no monetary gain should this system be implemented.

I know it’s hard to believe that all this effort isn’t somehow motivated by money. I would imagine that Cortez would be compensated in some way shape or form. Regardless, the kind of advances being made by Cortez would forward the boxing world into a more progressive and hopefully more positive manner. Those strides alone are enough to turn a Hall of Fame career like Cortez’s into one of boxing’s most celebrated humanitarians.

According to Cortez, The Ring Magazine’s coverage on his system will be on the next issue. I’ll reserve my full opinion on the system until I can see the physical evidence (i.e. pictures and data) provided by The Ring.

For Full Audio of This Interview Click Here: http://www.blogtalkradio.com/thaboxingvoiceradioshow/2012/09/23/pedro-diaz-joe-cortez-and-tony-weeks