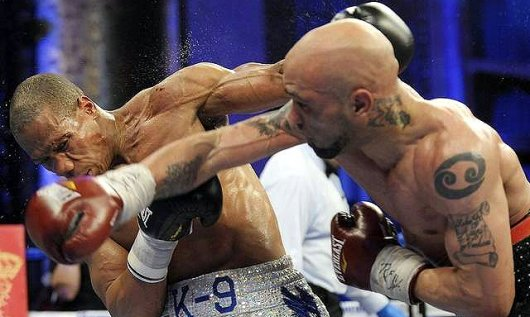 Ishe Smith has had a Cinderella story career. He had a ton or promise then things turned sour for him. Earlier this year, the Cinderella story hit its conclusion with Smith winning his first ever world title. Smith became the first ever Las Vegas born fighter to ever win a major world title and it was a dream come true. “It’s a great feeling .Something I knew (I would do it) for many years and finally to accomplish that. We worked extremely hard in the gym. We were not going to be denied that night and were able to capture that world title,” said Smith on his victory.

As far as fairy tales go, they always end happy and everyone lives happily ever after. For Smith’s fairy tale it has yet to end. On July 19th Smith will make his very first title defense against the highly avoided “King” Carlos Molina who will finally get his long awaited title shot.

So if Carlos Molina is so avoided why would Smith take the fight with Molina? “He earned his shot. He deserves an opportunity,” said Smith. But why is Molina so avoided? “People don’t want to fight him because he has an ugly style. You never really seen him in an exciting fight. When you see him fight you want to turn the television because of all the dirty tactics he uses.”

Hardcore boxing fans feel Molina is very deserving and his resume does not serve him justice. “I don’t know where they get that from,” stated Smith about Molina’s record. Molina has come up on the short end of fights in which he should have been victorious against fighters like Julio Cesar Chavez Jr., Erislandy Lara and James Kirkland. “He held James (Kirkland) that whole fight. He had a draw with Lara but it was the same scenario.” So in Smith’s eyes what types of fighters must Molina face and beat to be ranked as high as he currently is? “He hasn’t fought Cotto. He hasn’t fought Canelo. He hasn’t fought Trout. He hasn’t fought Rosado, so where is everyone getting this 154 pound resume from. He fought Alvarado when he was at 140 pounds and Alvarado wasn’t half the fighter that he is now. He fought Julio Cesar Chavez (Jr.) who isn’t half of what he is now. They need to stop that like this guy is some type of killer or something. Kermit wasn’t the same Kermit when he fought Molina.”

If Smith feels that way then one could call into question Smith’s resume. Can the same be said about Smith? “No it can’t cause I can go down my resume and say I beat Randal Bailey. I fought David Estrada. I can go down my whole resume.  I beat Ahmad Kaddour when he was undefeated.  I beat Pawel Wolak when he was undefeated.  I fought Danny Jacobs. I beat Guerrero. They gave me a bad decision but everybody knows I beat him at 160 pounds. We are not similar. I am a world champion and he is not.  Cornelius Bundrage had 32 wins, man you can’t compare us. Why do you think he can’t get on television? Cause nobody wants to put him on. People don’t want to fight me because I am dangerous. I don’t see a killer (in Molina).”

Smith did not have to face Molina but he stepped up to the plate and is facing his mandatory; something that most champions today do not do. Smith being part of “The Money Team” could have given step aside money to Molina to go on and face Miguel Cotto for an even bigger purse than what he is receiving to face Molina, which Smith says is a good purse. “If I do that, then I am just like every other champion. I don’t want to be like every other champion. Why try to cash out with Cotto, why not make some money? I’m a show you exactly how to beat a guy like him (Molina).  I’m getting paid good money for this fight. He got 6 knockouts. “But that doesn’t mean he is taking Molina lightly. Smith started camp early for his fight with Molina.

One would suspect that a close eye will be kept on Smith due to the recent controversies from a couple fighters coming out of the Mayweather Gym, most recently J’Leon Love. “I can’t worry about that. Whatever people think of us as a gym or an organization, we can’t really control them. My job is to go out there and make sure I am ready for Carlos Molina,” said Smith.

Smith seems more than ready for the tough challenge ahead inside the ring and sees nothing new coming from his opponent. “He (Molina) is not going to change. He is going to continue to fight that way. I have fought better people and I have beaten better people. At the end of the day…(after)thirteen years, I’ll go through hell to give that title up. When I step into that ring it’s my determination that leaves me to say I am going to beat everyone that they put in front of me. Bottom line is, he is not taking my title. Period!”