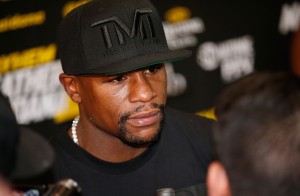 Is Floyd  Mayweather good for boxing?  There are only two answers to that question: yes and no. There is no maybe. No matter what your answer is there are many valid points to argue your decision. There are also several valid points to argue against your decision but what is the correct answer?
There is none.
Love him or hate him, Floyd has accomplished a lot in boxing. His undefeated fight record may be a big deal to many people that’s not what he was about. He spoke about his record often but making money is what he was about and he made plenty of it that it came across as his main focus. Was it bad for the sport?
Oscar De La Hoya has stated on several occasions that Floyd was unwilling to take risks and that would make his fights boring. De La Hoya has stated that Floyd is just plain bad for boxing and while many would disagree with him, some would agree including Jackass star Steve-O who opened up on Floyd during an interview with Elie Seckbach.
“You know what man? Floyd Mayweather is ruining boxing man,” said Steve-O. “Don’t you think his fights are boring? Oscars De La Hoya was right. He was right. He said ‘yo Floyd, you’re shit’s boring. You don’t take chances and your fights are boring.’ And now look at what’s happening, everyone is watching UFC.”
While the UFC is popular around the world and it’s fans claim that the UFC is slaughtering boxing and claim it as a dying sport, a boxer, specifically Floyd Mayweather is the name that some of the biggest names in the UFC call out to fight. A point that De La Hoya and Steve-O did not mention. Floyd may or not be good for boxing, it’s your choice, he is good for the UFC though to help the fighters make more of a name for themselves and boost their ratings.
Tweet