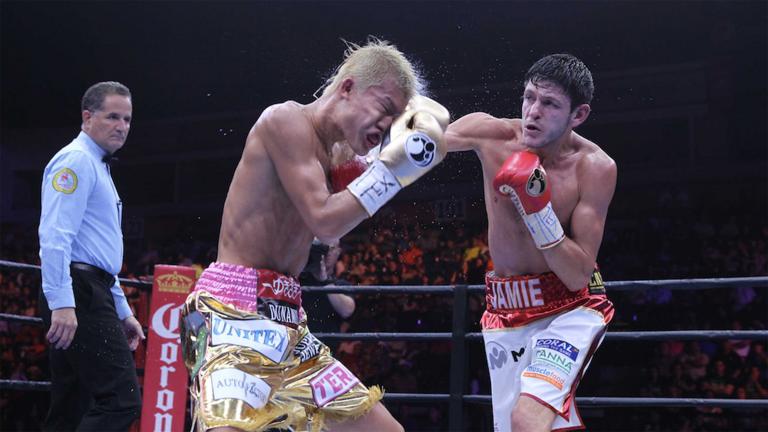 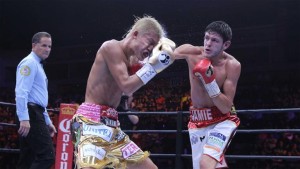 McDonnell was without his usual trainer Dave Hulley, who, unbelievably, refused to travel because of a crippling fear of flying. It’s a good thing Dave Caldwell and Tony Bellew were around to augment the diminished camp thousands of miles from home.

Three rounds into the fight -which aired on NBC’s ‘Premier Boxing Champions’ broadcast- things were on a downward spiral. Mcdonnell was dropped by a lightening fast right hand that Kameda sprung in with in his low-handed, languid style. Up to that point Mcdonnell appeared to be troubled by Kameda’s overall speed; he was very quick across the canvas during those early stages and his twitchy upper body movements kept him out of trouble for the most part.

However, after the fifth round McDonnell began to close the gap both on the cards and in the ring. He began to continuously pressure Kameda, coming inside behind a high guard and landing a few shots before getting out of range. He did this time and again until Kameda looked to tire visibly, and towards the latter stages he was doing all he could to find a breather in the face of this unrelenting pressure; skipping around on the outside and clamping on clinches when possible in close.

Mcdonnell talked Skysports.com through the experience.

“His speed surprised me on the knockdown. I knew he was going to be fast, but I didn’t expect it like that. I didn’t see the shot and next thing I knew I was on the floor. Hit and move hit and move, that was the strategy. I remember being in there and thinking, ‘Man, this isn’t easy.’”

McDonnell looked a bit scrambled after the touched the canvas and Kameda’s rapid-fire jab and hooks to the body definitely didn’t make the evening any easier. But it became increasingly apparent as the bout wore on that McDonnell was the fitter of the two and had more confidence in his own engine to push the pace of the fight. He won almost every round after the fifth to secure a unanimous 114-113 on all three of the judges scorecards in front of pro-Kameda crowd, and it was his work rate combined with his outstanding cardio that did it for him.

Despite the occasion seeming quite daunting beforehand, McDonnell says he refused to let it rattle him.

“It’s been a fantastic time being here in America. I’d like to see some familiar faces, but it’s a new experience. I was up against it, but I knew I could pull it off. I knew deep inside that I could do it.”

“I felt in control all the way through. It was a great performance. I know I should have just boxed but I wanted to fight. I didn’t think I was going to get the decision being abroad, but it’s more than spectacular to come out of here victorious. He’s a great, undefeated champion.”

Ironically, McDonnell was at his most effective when he chose to fight. His inside game was far superior to that of the Mexico-based Japanese fighter; he recognised the openings far quicker when they were forehead-to-forehead and had the confidence to exploit them even after shipping some heavy shots himself.

He proved his worth on Saturday in a fight he wasn’t supposed to win. Kameda relinquished his WBO belt in the build up due to some political issues and was expected to warm his waist immediately with a win against a credible, but beatable, opponent in McDonnell. It just didn’t work out that way and McDonnell deserved the decision.

On the back of the biggest win of his career, the Doncaster native announced his intention to move up in weight and mix it with a host of big names at super-bantamweight.

“I think I’m going to move up in weight. I want to catch the big fights before they’re gone.”

Fellow Matchroom Sports fighter Scott Quigg holds the WBA belt at 122.lb. and so is a realistic target, but Carl Frampton, Leo Santa Cruz and the dreaded Guillermo Rigondeaux also hold belts up there. McDonnell certainly has the frame for it and has now shown he lacks nothing in the skill or temperament departments. Some big fights lie ahead for him.