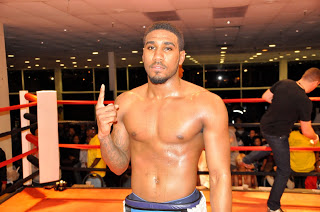 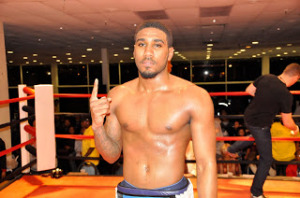 This past Friday at Harrahs Philadelphia, some of the best young prospects in the country were featured on a six bout card promoted byKing’s Promotions and XFE.

In the main event, Jarrett Hurd held on the defeat late replacement Emmanuel Sanchez via six-round majority decision on a Middleweight bout.
Hurd was aggressive early and took the first half of the fight.  Sanchez, who took the bout on just two days notice came back and befuddled Hurd by boxing off the back foot and landing straight left hands.
Hurd’s early work was the difference by winning by scores of 59-55, 58-56 and 57-57 to raise his perfect mark to 14-0.  Sanchez is now 5-2
In the co-feature, good looking Jr. Lightweight prospect Omar Douglas scored an impressive first round stoppage over Osnel Charles in a scheduled six-round bout.
Douglas looked very sharp and then landed a booming left hook that slumped Charles between the bottom and second rope and the fight was stopped at 2:21 of round one.
Douglas of Wilmington, Delaware is now 13-0 with 10 knockouts.  Charles of Atlantic City is now 10-13-1.
18 year-old Milton Santiago Jr. boxed very well in pounding out a 4-round unanimous decision over Travis Thompson in a Lightweight bout.
Santiago, who is showing improvement in each battle fought off Thompson’s hard work inside to win by shut out of 40-36 on each card.
Santiago, who is a Sr. at William Tennent High School improves his mark to 8-0.  While Thompson falls to 7-12-3.
Stephen Fulton of Philadelphia stayed perfect by scoring a 4-round unanimous decision over Benjamin Burgos.
Fulton, who was a Philadelphia amateur of the year, used quick hooks and straight right hands to offset the hard charging Burgos.
Fulton landed the much cleaner blows and Burgos was docked a point in the final round for hitting behind the head.
Fulton, 20 years old of Philadelphia won by scores of 40-35 on all cards and is now 3-0.
Former amateur standout Caleb Plant was impressive in stopping Darryl Gardner in the first round of their scheduled 4-round Middleweight bout.
Plant of Tennessee, dropped Gardner with a vicious double left combination and Gardner was down for a several minutes.
The bout was stopped at at 1:35 of round one and Plant’s record is now 5-0 with 4 KO’s.  Gardner of Washington is now 2-5.
In the opening bout, Brooklyn’s Earl Newman boxed well with his jab before taking out Jade Ealy in the first round of their scheduled 4-round Cruiserweight bout.
Newman landed stiff jabs before opening up a hard flurry on the ropes.  Ealy covered up and the bout was stopped at 2:57 of round one.
Newman is now 3-0 with 3 knockouts.  Ealy is 1-2.
Tweet