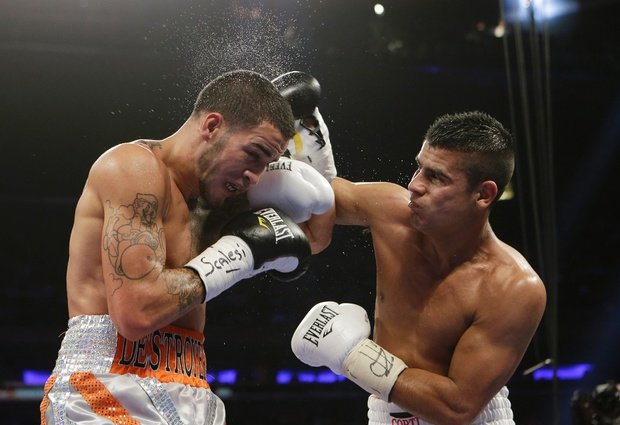 In the second undercard bout of the Cotto vs. Martinez pay-per-view broadcast, Jorge Melendez (28-4-1, 26 knockouts) took on last minute replacement, Javier Francisco Maciel (29-3-1, knockouts) in a junior middleweight match-up. Originally supposed to feature Melendez versus Yuri Foreman, Maciel was forced to take on the bout following an injury that sidelined Foreman three weeks out. It was a(n) (arguably) big loss for the card, and the stage seemed set for another one-sided victory.

From the onset of the bout it was clear that neither fighter was going to win on technique alone. This provided for some entertaining, and competitive fighting between the two men, but early on Maciel was looking like the favorite. Simply put, Maciel forced Melendez along the ropes and followed up with blow-after-blow while Melendez was left trying to respond with single punches. The two continued with some decent action in the following rounds, but with Maciel seemingly getting the upper-hand Melendez was quickly grown frustrated. This was becoming apparent by the number of low blows thrown which eventually led the referee to dock a point from Melendez in round four.

Things didn’t get much better for Melendez from that point as he was once again docked a point in the fifth for low blows. To make matters worse, Maciel managed to drop him with a perfectly time right hand that sent Melendez to the canvas. The round was ultimately scored as a 10-7 for Maciel, and as close as it seemed the momentum was all Maciel’s.

Surprisingly, Melendez had much better rounds following the devastating fifth. It appeared as if Maciel was already beginning to gas out, and Melendez was quick to capitalize. With each round, Melendez looked like he might manage to pull out the victory while Maciel just got more tired. Fortunately, Maciel was far from finished and showed some life in the seventh with a quick flurry of shots.

The tenth round saw both men doing their best to fight off fatigue and top the other as it was clear that the scorecards were going to read brutally close. Melendez did well early, but more importantly it was Maciel who closed out strong in the final moments of the round.

The majority decision was awarded to Javier Maciel on scores of (96-92), (97-91), and (94-94). It was a gritty, and quite frankly, ugly fight, but it was an impressive win by last-minute replacement, Maciel. There’s no telling where this win may take him in regards to his career, but with that kind of performance one can’t help but wonder what he’ll look like when he’s actually prepared.