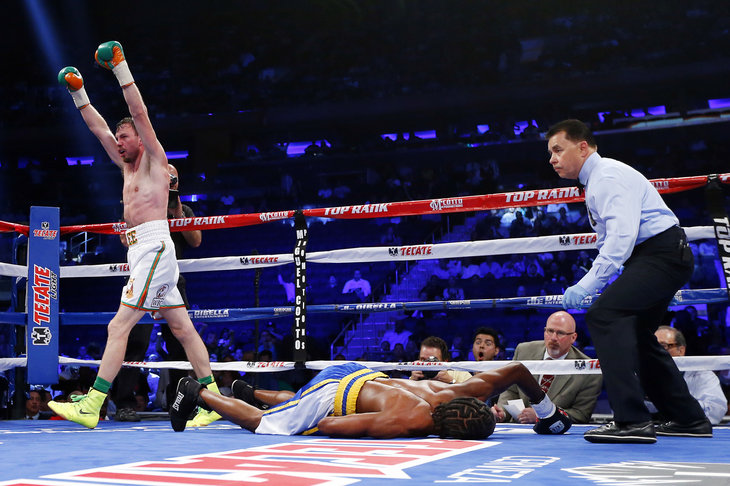 In the first televised bout of the Cotto vs. Martinez undercard, Andy Lee (33-2, 23 knockouts) took on John Jackson (18-2, 15 knockouts) in a junior middleweight affair. The match-up was a talking point due to it being Lee’s first fight at 154-lbs., but was even more important considering the virtual slide his career has been in. Ever since a 2012 loss to Julio Cesar Chavez, Jr. Lee has been in a clear decline so a victory over Jackson, especially an impressive one, was crucial to make another title bid.

The fight couldn’t have started any worse for Lee as he went for a series of hooks, and Jackson countered with his hook hook that floored Lee. It was a hard knockdown, but Lee managed to beat the count and survive the round. Things didn’t look like they were getting much better from there, unfortunately. For the next three rounds, Jackson was clearly in control. Deciding to go southpaw, he was determined on landing that right hook that already proved effective in round one.

Lee certainly did his best to remain active, but Jackson was buzzing him with blows. Suddenly in the fifth round, Lee stumbles a bit as he moves around the ring. This prompts Jackson to move in and put an end to his seemingly hurt appointment, but before Jackson can finish the job Lee manages to uncork a counter right hook that sent Jackson tumbling to the ground motionless.

It was a stunning one-punch knockout, and a desperately needed victory for “Irish” Andy Lee. With a semi-successful debut at 154-lbs. Lee has undoubtedly managed to take one step closer to fighting for a world title, and it is an opportunity that may come sooner rather than later. After all, Lee’s debut was far from perfect and there are many who would be more than willing to face him in hopes of adding a notable name to their resume.

There’s no telling when and if that title shot may ever come, but whether it was due to luck or not, Lee has certainly provided the jolt that his career so desperately needed.