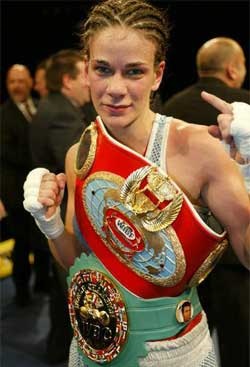 Six time women’s world champion and current WBC featherweight champion Jelena Mrdjenovich will return to the ring this March in Edmonton, Alberta, Canada and she will look to start the year off with a bang and there are two opponents in mind for her to face. Ji Hi Woo who is the current IFBA featherweight champion is on the list but will be unable to participate due to a title defense that is happening in March. The other option currently on the table is super featherweight interim champion Hyun Mi Choi.

Although nothing is set in stone and the options could change  between now and when contracts are signed it looks to be a hell of a fight should it happen.

Mrdjenovich last stepped in the ring in December of 2013 when she made quick work of her opponent Wanda Peña Ozuna with  first round KO in just 39 seconds of the first round.