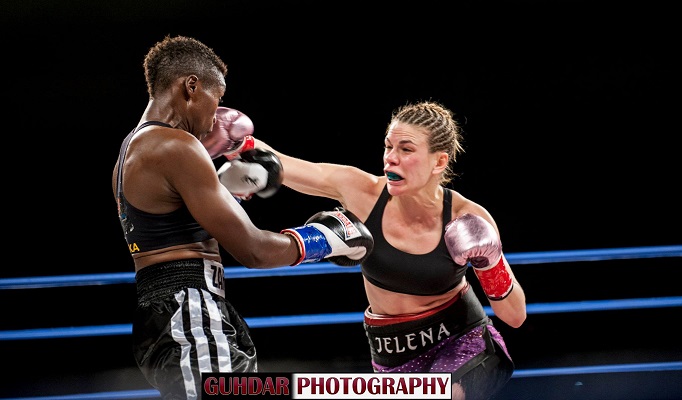 Mrdjenovich used her size and power against Fatuma throughout the fight scoring a knockdown with two left hooks in the first round. After the knockdown Fatuma would use her speed and slickness to often dodge Mrdjenovich and exchange although at times she was hesitant.  The difference in the fight was Mrdjenovich’s punch output, power and relentlessness against her opponent. Judges’ scorecards read: 100-89, 99-90, 98-91 all in favor of Mrdjenovich.

Former Olympian Adam “A-Bomb” Trupish (11-2, 8 KO’s) was outgunned and battered by Phil “The Assassin” Rose (5-2-1, 4 KO’s) to a fifth round stoppage. Trupish took a severe amount of punishment (or so the look on his face would make you believe so) and went down from Rose’s thunderous shots. After being pinned against the ropes and used as a punching bag the referee stepped in and stopped the bout at 1:57 of round 5.

Edmonton prospect Josh Wagner (3-0, 2 KO’s) continued his winning streak with third round stoppage over Luke Moore (1-1). Coming into the fight Wagner had a tremendous size advantage over Moore which he used to pound his opponent and finished him off with a shot to the ribs which sent him down for the ten count.

One of the most exciting fights of the night were between Sheena Kaine (1-0) and Angel Anderson (0-1). Both fighters made their professional debut that night and from the opening bell these ladies looked to put on a show by slugging it out which resulted in Anderson going to the canvas in the first round. The two kept slugging each other in the second but by the halfway point of the third began to slow down as their energy levels dwindled and then Anderson began to come on strong but ended up short as Kaine continued to catch Anderson with clean shots. All three scorecards read 40-35 in favor of Kaine.

Polish junior middleweight prospect Lukasz Wierzbicki (2-0) made his return to the ring against Antonio Dos Santos (2-8, 1 KO). Dos Santos awkward style was no problem for Wierzbicki who was able to keep Dos Santos at a distance and outbox/outslug the Cuban. The judge’s scorecards all read 40-36 all in favor of Wierzbicki.

Cody Ries (2-0) seemed to have no problem in his second pro fight when he took on Matt Jelly (0-2) in their four round bout. Jelly was hesitant throughout the fight to throw punches which opened the door for Ries who took full advantage of his opponent. Final scorecards read 40-36 in favor of Ries.

In the opening bout of the evening Jama Gaiye Mohamed (2-2) took on former MMA fighter Eric Huang (1-0) in Huang’s debut. From the opening bell it seemed as if Huang forgot he was in a boxing ring and immediately went to tie up his opponent and tackle him to the ground which happened quite often throughout the fight. Huang was able to score a knockdown on  Mohamed in the first round and pound on the taller, lanky fighter when in close range. Huang won a unanimous decision with all three scorecards reading 39-34.