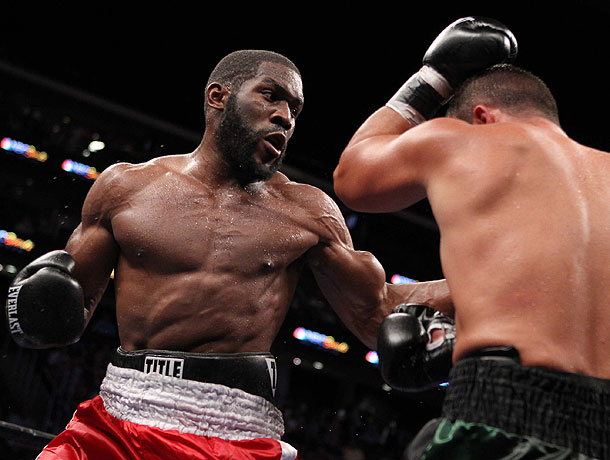 PHILADELPHIA (Jan. 13, 2014) – Undefeated Heavyweight contender Bryant “By-By” Jennings (17-0, 9 KOs) is preparing for the biggest fight of his career when he faces fellow unbeaten, polish superstar Artur Szpilka (16-0, 12 KO’s). The bout will take place at The Theater at Madison Square Garden, as the co-feature to Garcia vs. Burgos which will be televised live on HBO Boxing After Dark®, on Saturday, Jan. 25, beginning at 9:45 p.m. ET/PT.

With less than two weeks away from his showdown with Szpilka, Jennings reflects on training camp, making his HBO debut and fighting at Madison Square Garden for the first time.

“I’ve been in the gym since my last fight back in June so I’m ready to go,” he said. “My trainer Fred Jenkins and I have been grinding, working on new things, trying to improve on what I do best, which is to box my opponents ears off.

“I know Szpilka is a big star in him native country, but his “0” has got to go, and his fans must deal with him losing for the first time.  I’m healthy and I feel I’ve improved my ring intelligence since I fought last.

“An opportunity like this, to fight on a big stage like HBO, is a dream come true,” Jennings continued.  “When I first stepped in the gym, which was about five years ago, I always envisioned myself fighting on HBO. Now it’s time to show the world what Bryant Jennings is all about.  I want to thank my promoters Gary Shaw and Antonio Leonard as well as my manager James Prince for getting me this opportunity.  HBO needs some fresh heavyweight talent to showcase and I’m the one to take make it happen.  I’m coming to win and win impressively.

“Everyone knows the Madison Square Garden is a place where many fighters have made their name famous.  I plan to follow in the footsteps of the greats that have fought there before and continue on my path to greatness. God willing, everything goes as planned.  Philadelphia will definitely be in the house and I want to personally thank all my fans for their support,” Jennings concluded.