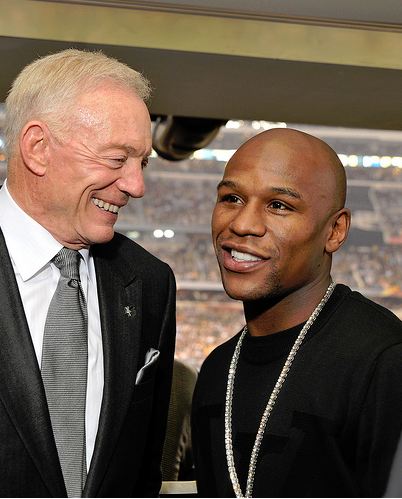 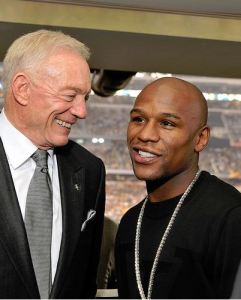 While most of the talk this was on “The Chris Algieri Show,” the rumblings once again began for a possible Floyd Mayweather-Manny Pacquiao fight. Now while Mayweather’s competition for May 2nd is a possible Miguel Cotto-Canelo Alvarez bout which could take place in the Dallas Cowboy’s AT&T Stadium, Jerry Jones, the owner of the Cowboys says he would love to stage Mayweather-Pacquiao in Dallas should it happen.

“Well, it’s well known that I would walk over and I guess have to get in some boat time too to get over and meet [boxing promoter Bob Arum] in China to get it done,” Jones said Friday on 105.3 The Fan [KRLD-FM]. “I’d be that excited about the possibility. It’d be a great fight. It’s going to be contemporary, it’ll be one of the greatest fights in the last 15 years when it does happen.”

The stadium known as Jerry’s World can hold over 100,000 fans and has a jumbo screen that is 60 yards long. The same stadium has hosted two of Pacquiao’s pay-per-view fights in the past. Jones and Top Rank Promoter Bob Arum have a good relationships and when the Super Bowl was housed in Jones’ stadium, Mayweather and Arum were special guests of Jones and shared a suite with the owner.

“It needs to be in our stadium and I want to be a part of, working with Bob. CBS of course is really involved in the promotion of it, and we’d love to just in any way have that fight here. It would be a real, well it’d just be an epic event for our stadium.”