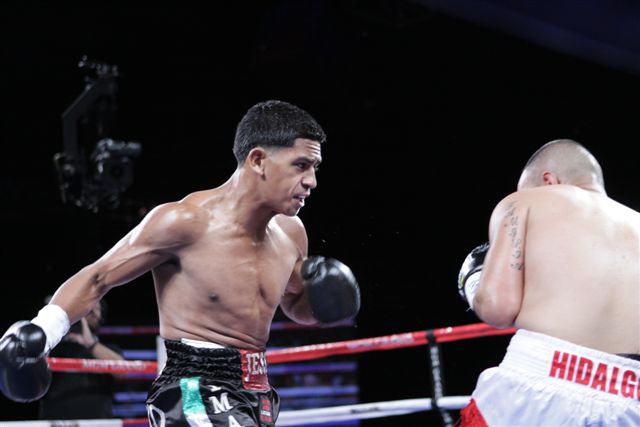 Beginning on Thursday, December 6, 2012 there is a Super Bantamweight fight that is not only important for the competitors but is important because it kicks off an All Start Studded Boxing Weekend.  The Super Bantamweight bout will be held at the Mirage Hotel and Casino in Las Vegas, Nevada.  In this specific fight the NABO Youth Title will be on the line.  Jesse Magdaleno whom is a southpaw with a record of 12-0, (9 KO’s) is taking on Jonathan “Lil Thund’r” Arrellano whom is an orthodox fighter with a nearly perfect record of 13-1-1, (3 KO’s).

Magdaleno’s last fight was only a few weeks ago and he is fighting as often as possible using the correct mentality in choice of opponents. His last fight was against Jose Silveira, whom he annilated via TKO in the first round and isn’t hesitating a lick to jump right back into the ring and up to anti if you will by facing more credible and also a higher caliber foe in Arrellano.

This fight will be held on ESPN 2’s Premier Boxing Sequence.  I individually deem this fight to be a very interesting confrontation to say the least. This fight is on the undercard of the well awaited Lightweight contest between  “Sugar” Raymundo Beltran whom has a record of 26-6, (17-KO’s, ) vs. Ji-Hoon Kim who is known as “The Volcano” and has a record of 24-7, (18 Ko’s).

Jesse Magdaleno was born in Pomona, California but also resided in Los Angeles where his mother is from. He now fights out of Las Vegas, Nevada.  He has a considerably large family comprising of three older sisters, one younger brother, and an older brother whom also boxed as an amateur.  As a child Jesse took after his father whom played soccer which just so happened to be Jesse’s passion for the multitude of his childhood. The more he watched his older brother Diego train which was an everyday thing, he couldn’t help but to be enthralled and impressed with the dedication and the one main fact that Jesse really wanted to follow in his big brother’s footsteps, hence soccer disappeared into oblivion.

Jesse had quite an illustrious amateur career himself, with 138 fights and losing only 15.  Magdaleno started out as more or less a southpaw that for a young fighter with limited rounds already seemed to preserve a firm chin which helped him sculpt his fan friendly style of being the aggressor, and not shying away from an all-out war even when it wasn’t always warranted.  Never the less the knock outs still came for the simple reason that unorthodox fighters that aren’t afraid to take a few shots in order to land their own thunderous punches is enough to give any opponents trainer gray hair. As far the opponent himself, it’s a rather painful and confusing nightmare stricken night; kind of reminiscent of Manny Pacquiao at that young age.

Gradually Magdaleno transformed himself into an ever-growing and still learning boxer-puncher and had this to say “When I fight I can be a boxer and at the same time I can be a brawler.  My game, I usually put the pressure on more.  After my first professional fight I kind of noticed that I still am sort of fighting like an amateur, throwing an outrageous amount of punches and using my speed a lot more. After that fight me and my brother Diego, we worked hard and he taught me a lot of the stuff that I kept my eyes open on from calming down, using the ring more, being a boxer instead of always being a brawler.  He’s teaching me everything step-by-step going into the professionals.”

Jonathan “Lil Thund’r” Arrellano fights out of Ontario, California and has fought the majority of his opponents in is back yard or for the most part in California.  Arrellano hasn’t fought even comparable adversaries compared to Magdaleno’s.  This will be Jonathan’s toughest assessment to date, and he knows he will be fighting a young, hard hitting and very intelligent southpaw that more than likely has fought better opposition and has a better amateur pedigree.  I am a resolute advocate that all staggering records don’t show the true competence in the fighter.

Styles make fights and I think a knock out will most likely transpire in this bout.  And what boxing fan doesn’t adore a note- worthy, chin checking knock out?  With Magdaleno’s  pit bull aggressiveness and be first approach, I don’t see “Lil Thund’r” bringing any form of storm except for maybe a strong breeze felt only by the ringside judges and the writers sitting in press row when his 122 lb. frame flops uncontrollably to the canvas.  I visualize Magdaleno bringing the thunder and earning himself the NABO Youth Championship and moving on to bigger and better things with a bright future in a packed division with names such as Vic Darchinyan, Abner Mares, Guillermo Rigondeaux, and last but not least one of the pound for pound kingpins and champion of the division, Nonito “The Filipino Flash” Donaire.