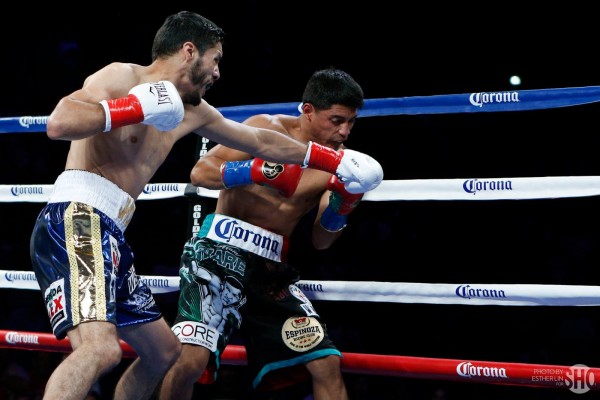 Going into the main event of the August 25th edition of Showtime Champion Boxing, one would be hard-pressed to find many who were picking Jhonny Gonzalez (55-8, 47 knockouts) to upset the featherweight champion, Abner Mares (26-1-1, 14 knockouts). In reality, this fight had many convinced that Mares was simply taking a type of showcase bout so that a future Santa Cruz vs. Mares fight would seem that much more enticing in the future. To put it simply, Gonzalez made all of those doubters look like fools.

As the title may suggest, the main-event seemed to be over just as soon as it began. Both fighters answered the opening bell in a rather tentative manner as both seemed keen to box rather than brawl. Growing impatient, Mares began to open up and begin throwing some power shots with the hopes of getting Gonzalez to open up.

Before Mares was able to do much more, Gonzalez opened up with a quick burst of punches that saw Mares touch the canvas after a Gonzalez left hand managed to land flush. Mares beat the ref’s count and was determined to continue pushing the pace in an effort to put Gonzalez away. Instead, Gonzalez capitalized on his opponent’s wobbly legs and began unleashing another volley of blows with the sole purpose of stopping the tough Mexican champion.

After a left hook and straight left hand, Mares was dropped in an even more violent manner. This led to the referee stepping in and calling an end to the fight after determining that Mares was unfit to continue.

For anyone else, a first round KO loss would be a potential career killer, but for a fighter like Mares it will be nothing but an obstacle to overcome. Although talks of a bout between Santa Cruz and Mares have been put on a temporary hold, one can’t be disappointed at the thought of a potential rematch between Mares and Gonzalez. It may not have been the outcome fans expected, but it was the type of exciting surprise people will always appreciate.