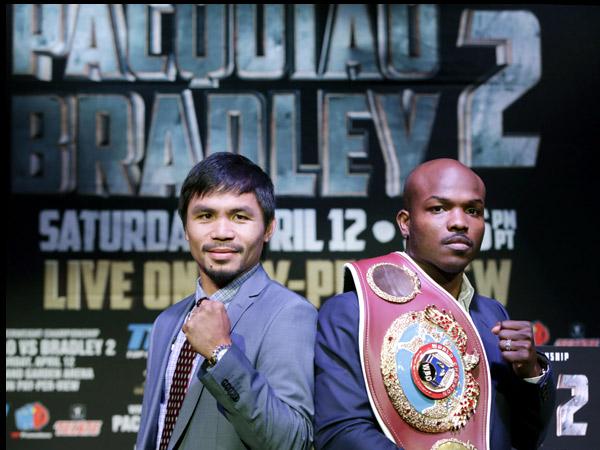 If you watch the first fight between Manny Pacquiao and Tim Bradley, to the naked eye, well at least too many, Pacquiao won running away. However with the internet, YouTube, and the easier access in re-watching the fight multiple times, people re-watched and re-watched and made their case for Tim Bradley losing a close fight or winning. The rhetoric was, “Watch the fight with the sound off because of HBO’s biased commentary.” Our correspondent Robert Ortiz caught up with the man at the heart of the call, Jim Lampley to get his thoughts on Pacquiao-Bradley 1, the journey to the rematch for both men, and his thoughts on the rematch.

On The First Fight and the Scoring:

“It was a pretty good fight, I don’t score fights. My general sense was that Pacquiao had won it and won it pretty easily. Ton Hauser Bart Barry and Brian Kenny, you and the judges scored it for Bradley. Max Kellerman went back and looked at it and said here are 7 rounds he believes Manny Pacquiao won, 1 round he believes Tim Bradley won. Then there are 4 rounds that could have gone either way. Max picked Bradley to win the 1st fight. He thought Pacquiao won it, he’s picking Bradley to win it again.”

On Bradley’s war with Provodnikov:

“I think Bradley gets credit for beating Ruslan Provodnikov but by the same token he almost lost a fight to a fighter that was not exposed on a level of boxing above an ESPN 2 fight. It was a close fight and many at ringside felt as those Provodnikov could have won it. People remember the fireworks and Ruslan provided most of the fireworks in that fight.”

“As for the Marquez fight, I thought Tim Bradley won that fight. I thought the decision was correct but if that fight had been scored for Marquez, I don’t think there would have been much controversy. It isn’t as if Bradley has gone out and torn the house down since the Pacquiao fight.”

“As for Pacquiao, he took a fall against Juan Manuel Marquez in a fight that he was winning on the scorecards, in a fight where he had bloodied Marquez. So it’s not like he didn’t get anything accomplished on that fight. Maybe he pressed too much to get the knockout.  Maybe that’s something to think about as he gets ready for a fight where his trainer is once again asking him to press for the knockout. “

Learning From The Rios Fight:

“Pacquiao fights Rios in a fight where you know he’s going to win because Rios is statue. He doesn’t have the kind of movement that Manny can do in the ring and he isn’t going to get much credit because everyone knows Brandon is basically a plodder and isn’t on the same skill level as Manny. If anything you might think Manny could have pressed harder for a knockout and please the crowd. “

Changes in the rematch:

I think there are nuisances for both fighters since the 1st fight. Now as we get ready for the second fight you have this new mental environment where Bradley seems to hammer home the fact that he won the 1st fight. Now he’s motivated by the desire to prove to fans and media that he was the winner of the 1st fight. That could be misguided because this isn’t the 1st fight,  this is a whole separate fight. Freddie Roach watched his fighter get knocked out by a strong counter puncher in Juan Manuel Marquez is again urging his fighter to press the issue and seek the definitive conclusion.”

“I don’t think Tim Bradley can hit you as hard with a straight right hand as Marquez can. So maybe Roach is correct in assessing that the danger isn’t the same. But still most of the civilized world minus you and the other 3 media members who scored the fight for Manny Pacquiao. So there’s a center logic as to why would you do anything different when most people thought you won 8 or 9 rounds. There’s a fascination to that the misguide judgment and the media response to that where both fighters could be subjected to certain pitfalls in the rematch.”