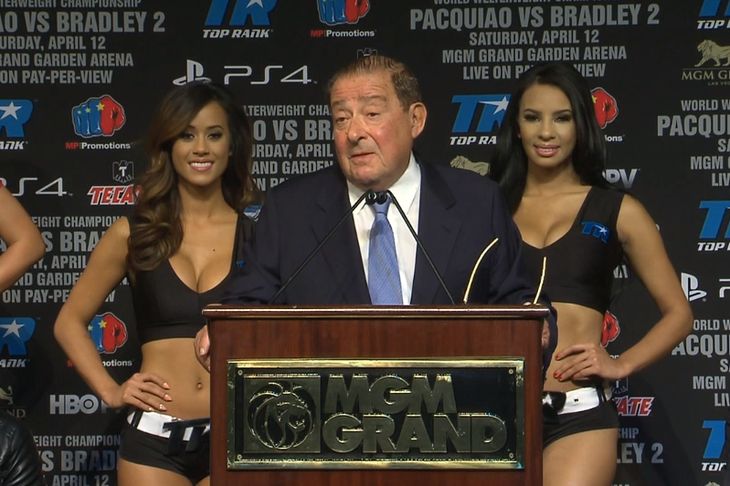 Bob Arum went on what he himself described as a “possibly incendiary” tirade at this past weeks’ Pacquiao vs. Bradley press conference. His attack was mainly aimed at The MGM Grand, Mayweather and Showtime executives, in that order. But did he go too far?

He said that the MGM Grand struggles to meet their debt obligations on a quarterly basis or something along those lines. The old man proclaimed that on the other hand, the Venetian makes a billion dollars a quarter and would have not had made the mistake of having Mayweather fight billboards up, during Manny Pacquiao’s fight weekend.

He went as far as to compare Showtime’s Stephen Espinoza to the notorious convicted murderer and fight fixer, Frankie Carbo. Mr. Arum is a very intelligent man and said this, because he knew that it would go under the radar. Most people don’t care about boxing history. I do however; I did not know who this man was.

It was only after Stephen Espinoza and I exchanged a few words on twitter. I decided to watch the video and did some research on Carbo, that I realized the magnitude of the insult Bob Arum had hurled, Stephen Espinoza way. He also alluded to some not so kosher activity that may be going on, something about, “Fighters paying to get on shows.”

Stephen Espinoza points at this incident as a prime example of why they are having a hard time even considering, doing business with Top Rank. Bob has assassinated his character at a world wide publicized press conference. The offensive rhetoric coming from Bob might be a little over he top. How much should he be able to get away with? He closes by apologizing with, “Sorry if anything I said that was incendiary, I am an old man.”