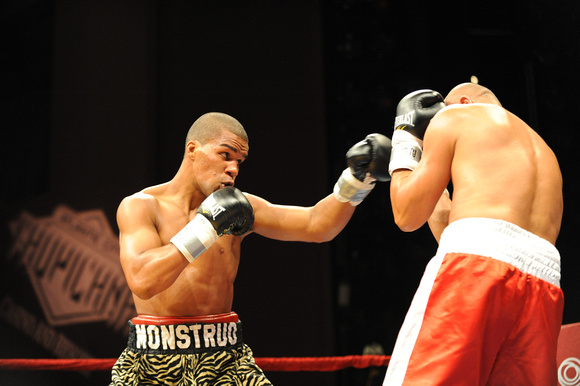 Jason Escalera (13-0-1, 12 KO) is the epitome of what boxing means for most fighters, since the beginning of the sport. Boxing has always been a refuge for many inner city kids looking for a way out, a way to excel in life. Like most fighters’ stories, Escalera’s isn’t to different so much so that he’s playing the role of a fictional character in real life, his life.

Escalera is a full time worker at his local Food Basic super market where he works in the meat department. That sounds familiar; I know, I’ve seen that movie as well. He puts in 40 hours a week then trains every day. September 29, 2012 Escalera and his trainer Joe Botti both go into the ring as the blue collar underdogs, but fully aware and confident of what’s at stake and what’s on the horizon if they pull out the upset over Edwin “La Bomba” Rodriguez (21-0, 14 KO) super middleweight prospect out of Worcester, Mass. “We’re not taking this guy lightly, we know he’s a really good fighter. We respect him a lot but like I said we see a lot of flaws, defensive flaws. Offensively he’s a solid fighter, but as the fight goes on, he seems to fade. I notice that in his last couple of fights I think that might have something to do with him having problems making the weight, but we’re going to take advantage of that in the fight,” explained Botti.

Joe Botti isn’t concerned or threatened by his fighter having the thinner résumé on paper.  In fact he’s counting on the opposing team to think just that, he’s been busy watching countless hours of tape studying and planning this moment to the T. Thing is, we’ve all seen Edwin and his last two wins over Will Rosinsky and Don George (his HBO debut).  In the Rosinsky fight, some had him losing and it was a rematch Rodriguez’ promoter Lou Dibella wanted to make and at one point expressed that over our air waves on Tha Boxing Voice Radio.

It was a controversial win to say the least. The George fight was titled “Bombs Away”, yet the only bombs thrown was on the main event. Rodriguez came into the George fight with a new game plan, a boxers mentality and we didn’t get the exciting Edwin from earlier in his career. “I think the most important punch we’ll have to throw is the jab. I think Don George showed that in his last fight, Edwin [Rodriguez] was susceptible to the jab throughout the fight. I think that is the most important punch because that sets everything else up; in our last fight we didn’t throw a lot of jabs. We realize that and we’ve been working a lot on jabbing, a lot on different angels with the jabs too. I think the jab is the key, it’s going to opening up a lot of things in this fight, and we need to really use that jab. I think Don George used the jab effectively; he just didn’t take any chances setting up with other shots. We’re going to do that, we’re going to come off the jab and we’re going do different things, “Botti said.

The reality is this isn’t a step up for Rodriguez; this is his “showcase” on HBO. Dibella and Team Rodriguez are banking on this being what it is on paper, a inexperienced kid with 13 fights that hasn’t fought anyone of note. “Absolutely not, Jason [Escalera] blown out top amateurs when he was an amateur. He ended a kid’s career that was a two time national champion and an Olympic hopeful. You can see that fight on YouTube, he destroyed that guy. He’s been in the ring and worked with the US Olympians from this Olympics [2012] to help them get ready. He worked with the #3 178lber. Professional wise, he’s worked with many of the top pros in the country,” enthusiastically expressed Botti.

During our conversation Botti eluded to certain things of his star pupil “Monstruo” as he called in the gym. Monstruo translates to monster in English; a fitting name if you talk to Botti as he feels Jason is feared which is the main reason for the lack of big names on résumé. Hence their willingness to jump at this opportunity to fight on the network that can give them the exposure they feel they deserve, not to mention knocking off a guy HBO is invested in, It may get you a return date also, or will it? Remember Dmitry Pirog anyone? “The problem is if you look on Edwin’s record, a lot of the guys like Aaron Pryor Jr, James McGirt Jr, [Ron Katz Match Maker at Star boxing confirmed] they refused to fight Jason, and they would not get in the ring with Jason. So here are guys that Edwin’s gotten in the ring in with that flat out refused, that we tried to get in the ring 4 or 5 times, offered them everything in the world,” Botti shared.

One can’t help to try and fathom whose idea was it to take a kid so green and place him in a fight in a guy that has the pedigree of Rodriguez who’s fought decent opposition and sparred likes of Carl Froch. Not to mention Rodriguez is a full time fighter. Escalera is also Puerto Rican with huge punching power and would have marketability to draw if matched right [Chavez Jr]. “He [Joe Deguardia] left that decision to me. So I spoke to Jason, we went back and looked at some tape and said you know what this guy is being carefully moved by [Lou] Dibella, he’s a good fighter but he’s not a super star. I don’t put him anywhere near the [Andre] Ward’s or the [Adonis] Stevenson’s, the [Lucian] Bute’s, and you know what? Fact be as it may, that’s why they don’t fight, that’s why he turned down a fight with Stevenson. I think they know he’s not ready, maybe not Edwin himself but his management team knows that’s he’s not ready for that level fighters.”

I believe the trainers go through their own hardship in wins and losses and while they may not be in the ring throwing the punches, they do throw punches metaphorically, provide strategic tactics, and sound advice in pivotal moments throughout a fight. It’s my opinion trainers mentally fight one another as their fighters face off.

Just this past weekend Pablo Sarmiento, trainer to Sergio Martinez, came away with a huge victory for both he and his fighter as they both matched up against Julio Caesar Chavez Jr and Trainer Freddie Roach. On the 29th Botti well confront the world renounced trainer Ronnie Shields. “Sure you take it to heart that how the kid looks in a fight is a reflection on me absolutely. Every trainer knows that their fighter has limitation, the key is to bring out the best qualities in your fighter while limiting the deficiencies, that’s what it is, a chess match. I know I’m up against a good team, but we’re a good team too. We’re ready to go out and pull off another upset.”