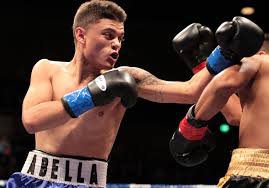 “Sactown Beatdown” has finalized it’s six fight professional card as the return of John Abella (5-0-1 3 KOs) of Sacramento, CA will headline the bout as he takes on tough bruiser Jesus Sandoval (3-3-3) of Redwood City, CA in a six round featherweight bout in Rancho Cordova, CA at Metro City Soccer. Abella, is coming off the 2013 Northern California Fight of the Year and this match up might just be a shoe in to duplicate the honor as both fighters like to engage rather than to take a more tactical approach to boxing. Abella who carries with him a dangerous left hook will have to face the pure pressure of Sandoval of Gladiator Boxing Gym who has a style that is favorable to the judges as he pushes the pace.

In the co-main event, Alberto Torres (4-0-2 1 KO) of Sacramento, CA will take on Anthony Smith (1-2 1 KO) of Fresno, CA in a four round featherweight bout. Torres recently received a draw against unbeaten Daniel Franco (8-0-3 5 KOs) in a six round fight in Oxnard, CA. Torres is looking to duplicate his performance from last year in Sacramento as he fought Percy Peterson in which Torres scored his first career knockout in the pro ranks.

Smith has worked with in the Mayweather Boxing Gym in Las Vegas, NV and is known for fast hands and fighting tough foes early such as the game spoiler Christian Silva and Marcello Gallardo. Smith’s lone win is a fight over Ronald Gaines in which he stopped him in the second round. Not unlike Abella, Torres’ stablemate at Caballero Boxing Gym, Torres like to get in close and work, meaning this fight could be a fast paced affair or a quick one.

Ryan Bourland (4-0 3KOs) of Vacaville, CA will take on the debuting Eric Smith of Sacramento, CA in a four round light heavyweight match. Junior middleweight Luis Cruz (0-0-1) of Broadway Boxing in Sacramento, CA looks to make his return to the ring after his draw with Miguel Lopez of Boxing For Health in Oakland, CA as he faces Cesar Renteria (pro debut) of Sacramento, CA in a four round bout. Rafael Busuioc of Sacramento, CA makes his pro debut against Percy Peterson (0-4-1) of Stockton, CA in a lightweight affair. The opening bout of the night will see Mario Cardenas (pro debut) of Vacaville, CA fighting Michael Gaxiola (1-0) of Modesto in a four round bantamweight fight. Gaxiola last fought two weeks ago earning his first professional win by way of majority decision in his hometown of Modesto, CA.