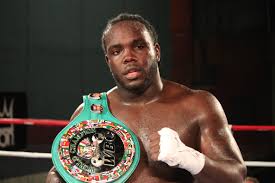 WBC heavyweight champion, Bermane Stiverne, spoke with ThaBoxingVoice.com about his potential upcoming fight with mandatory challenger, Deontay Wilder. Stiverne won the title back in May this year with a sixth round knockout victory over Chris Arreola.

The 35-year old Haiti-born told us that he has no idea when the fight with Deontay Wilder is going to take place. “I really don’t know. The purse bid is being postponed, something happened. I don’t like to get involved in that too much.”

When asked if he is concerned about who is going to win the purse bid Stiverne answered, “I am not worried about anything. Unfortunately, boxing today is more of a business. And you got a certain type of individual that gets very emotional. But whoever wins the purse bid is none of my concern. If it is Roc Nation, then it is Roc Nation. I am learning a lot of things here. There is a lot of things going on in the background that I am now finding out about. And it is not good for boxing.”

Stiverne says he is feeling great. His shoulder injury is gone and he is ready for whatever comes next. If that means waiting till next year to get back in the ring again, then that is no problem for the fighter. He elaborated, “I am used to waiting. This is what I do best. My whole career has been like this, whether it was because of injuries or politics.”