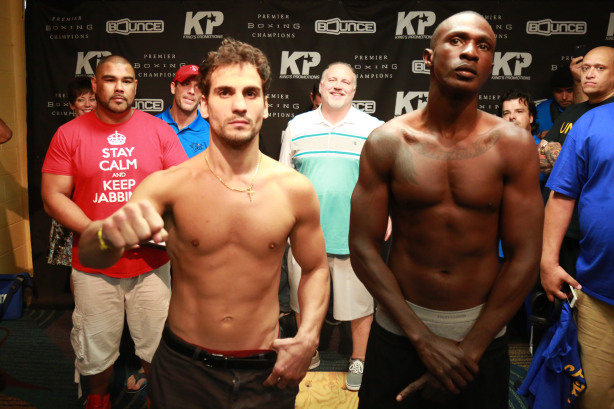 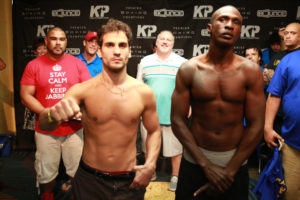 Exciting super welterweight Joseph Elegele (16-2 11 KOs) showed his strength and power Sunday night in the main event of Premier Boxing Champions: The Next Round on Bounce TV as he went toe-to-toe with Phil Lo Greco (27-3, 15 KOs) for 10 hard-fought rounds from The Lakeland Center in Lakeland, FL. Both combatants left it all in the ring, exchanging punches throughout the bout with close rounds that left the audience wanting more.

Elegele of nearby Winter Haven, FL started the bout coming forward, slightly stunning Toronto’s Lo Greco with several flurries of punches that set the tone for a hard fought back and forth battle. The action picked up in round two as Lo Greco came in on the attack early in the round, pinning Elegele against the ropes and continuing to pepper him with punches to the body and the head.

Despite being taken aback by the attack, Elegele came roaring back in the final seconds of round two and out of the corner to kick off round three. Lo Greco remained in the pocket, not afraid to continue to throw wide left hooks as the fighters traded punches back and forth.

As the fight continued, Lo Greco backed Elegele up against the ropes, smothering him with punches despite Elegele’s four-inch height advantage. But round six was completely controlled by Elegele as he threw a combination of bruising punches that very well could have sent Lo Greco to the canvas. However Lo Greco remained in the pocket. In the 10th and final round, Lo Greco came out strong, outworking Elegele, but with less than 20 seconds to go in the bout, Elegele stunned Lo Greco with a barrage of punches up against the ropes. Judges scored the bout 97-95 and 96-94 twice, all for Elegele, the winner by unanimous decision.

The second televised bout saw two former amateur standouts Dauren Yeleussinov (5-0-1, 4 KOs) of Kazakhstan, who now fights out of Brooklyn, and Devaun Lee (7-2-1, 3 KOs) of Queens, NY in an eight-round middleweight bout that ended in a split draw. Yeleussinov wasted no time in the first round as he kicked off the fight by throwing multiple left hands, one to the body and two to the head of Lee.

Lee escaped the round unscathed and despite spending the majority of the second round against the ropes, he was able to let his hands go and catch Yeleussinov with multiple shots. The 30-year-old Yeleussinov went on the attack in the sixth round, pinning Lee against the ropes, once again with a barrage of punches. Judges scored the bout at 79-73 for Yeleussinov, 78-74 for Lee and 76-76, ending the bout in a split draw.

In the opening televised bout, Australian prospect Steve Lovett (15-1, 12 KOs) battled Craig Baker (17-1, 13 KOs) in a 10-round light heavyweight showdown that ended with an explosive knockout. Baker of Baytown, TX was sent to the canvas in round four following a big left hook thrown by Lovett, but Baker was the more active fighter throughout the fight as he was up on all three of the judge’s scorecards going into the eighth and final round. With only three seconds to go in the bout, Baker sent Lovett to the canvas with a hard right hand that ended the bout.

Here is what the participants had to say about their respective performances Sunday night:

JOSEPH ELEGELE
“I wasn’t surprised because he’s a tough fighter, he’s a Canadian and Canadian fighters are tough. He came to fight. It was a good fight.

“It’s hard for anyone to find an answer for a straight left, but I was surprised he kept walking through it.

“I’m not sure what’s up with my left hand. It hurt me when I was throwing it, but I’m a warrior. I’ve been through too much in life to let a little-left hand hurt me. It could be falling off, and I’m still going to throw it.”

PHIL LO GRECO
“It was his hometown. The score could have gone either way. I hurt him in the second round. He was out, and the ref could have stopped the fight. That is no excuse. I will fight anyone, anywhere.

“I felt I was pushing the fight. I am disappointed in the decision.

“It’s up to the fans if they want to see me again. People see that I will fight anywhere and anyplace. I enjoyed tonight.”

DEVAUN LEE
“I don’t agree with the draw; I think I won the fight. I would have been comfortable with a split decision. He worked, but I landed clean shots, and I landed heavier punches. I feel like I won the fight. He has power, but he wasn’t powerful enough to stop me.

“Next, I’m ready for whatever they put in front of me. I would do it again.”

CRAIG BAKER
“Lovett is a strong guy, and he’s a hell of a competitor. He came to work, and he tested me, so it is what it is, man.

“This is awesome, man. This is what I sweat and kill myself in the gym for. This win means the world to me.

“He never hurt me tonight. We stayed patient I do what we do. This is the biggest win of my career, but I won’t rest until I get a title.

“I’ll fight whoever next. I’ll be back in the gym soon and getting ready for whoever the put in front of me next.

“Fighting on a Premier Boxing Champions card is amazing. I’m grateful to get the opportunity, and I hope to be back on PBC fighting again.”