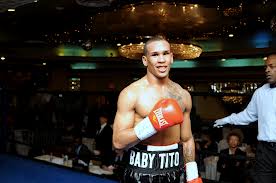 Juan “Baby Tito” Dominguez has now officially signed with Al Haymon. The talented undefeated fighter from Brooklyn New York says, “I feel very content and ambitious with my recent signing with Al Haymon.” Now there has not been any discussion between Haymon and Dominguez in deciding his next opponent, but Dominguez is already going to begin training. Dominguez told us, “I am now planning to train as early as tomorrow, and harder than ever to take full advantage of this great opportunity.”

The ambition of this 28-year-old fighter in his prime is clearly evident. He currently makes his mark in the bantamweight division. A possible opponent in the near future can be Leo Santa Cruz, who is also a part of the Al Haymon stable. If the Cruz fight doesn’t come into fruition, possible marquee matches can be Carl Frampton, Scott Quigg, Guillermo Rigondeaux, or Kiko Martinez.