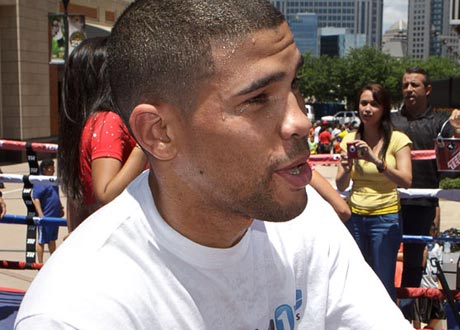 The one-time top Puerto Rican champion Juan Manuel Lopez (33-2 30 KO’s ) will try to get his career back on track, after suffering his second TKO loss to Orlando Salido in March 2012. On June 15th at the American Airlines Arena in Dallas, Texas, Lopez takes on the current WBO Featherweight champion Mikey Garcia (31-0 26 KO’s). In many ways this fight comes at a pivotal moment for Lopez’s career. Scheduled just 15 days before his 30th birthday, Lopez must win this fight to remain a perennial contender. In his last two bouts, Lopez has performed well, knocking out both his opponents. However, neither opponent was considered a serious contender or had any sort of notoriety.

What does a win over Garcia do for Lopez? Should the Puerto Rican Featherweight get past Garcia, it would revive his career to a point many once felt he deserved. Lopez has a fan friendly fight style, a high KO percentage (85%), and high profile wins over names like Rafael Marquez and Daniel Ponce De Leon. Beating Garcia would once again have fans clamoring to see Lopez fight and networks offering to broadcast the bouts. Plus, a win would make Lopez a subject of national pride for Puerto Rico – a country that has been searching for a high-level competitor since Miguel Cotto’s career began to decline in 2012 after suffering two straight losses.

However, the fight will be no easy task for Lopez. Garcia is defending his title for the first time. And Garcia beat Orlando Salido to win the title. Salido is the man who knocked Lopez out twice— giving him both of his only two losses. Garcia is hungry to keep his title and to prove that he belongs on the top of the Featherweight Division.

Should Lopez win, future fights could include a match against the number one WBO contender and fellow countryman, Orlando Cruz. Other possibilities for Lopez would include facing former Super Bantamweight champion Nonito Donaire. A Lopez victory on June 15th would cause fans to call for a Donaire vs. Lopez showdown, as both fighters have expressed interest in the past in fighting each other.

While a win would offer new opportunities to Lopez, a loss would push him to the back of the pack. His two TKO losses and recent suspension for making comments about the referee in his second fight with Salido, hang heavily. A high-profile win is a must for Lopez should he want to reopen doors that have recently closed. Lopez, undoubtedly knows this.