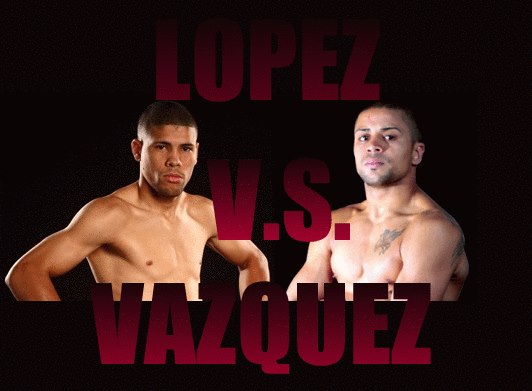 After rallying back two weeks ago to stop Jonathan Oquendo in seven rounds, it seems likely that Wilfredo Vazquez Jr. will meet with fellow country man and bitter rival, Juan ‘Juanma’ Lopez  sometime early next year. In a recent interview, Bob Arum said a date in Puerto Rico had been penciled in for February 2nd, 2013, at 130 pounds.

The bad blood between the two goes back a couple of years, and seems to have started over something and nothing. Stemming from an ESPN interview that Vasquez did in which he is alleged to have made some derogatory comments regarding Lopez and his team, being “mediocre”. Lopez took offence to this, slating Vasquez Jr. right back, “I don’t like to promote anyone else, so this is the last time I’m going to talk about him. Vazquez made some strong comments about me, that there is arrogance in me. He said my team was mediocre. I regret that he’s not here so I can tell him to his face; that if my teams mediocre, well it’s the same team that helped make him world champion,” Lopez said. “I am not arrogant, I’m cool with everybody”.

Vazquez refutes being offensive. In an interview with Carlos Gonzales, he fired back saying, “I don’t think I said anything offensive, so why would he say anything derogatory about me?” Vasquez was going on to say, “He disrespected me, I just gave him a tip as a fan who sees things from the outside.”

At this juncture Puerto Rican idol, Miguel Cotto intervened and urged for peace between the two, asking both fighters to stop their childish bickering, Cotto said, “It’s unfortunate that two fixtures of the sport in our country, who are beginning to give glory to Puerto Rico are now involved in a controversy like this. Boxing is big enough for both of them, to have bright careers to benefit themselves, and their families.”

It seems that Cotto’s well meant advice fell on deaf ears, as the build up to a civil war rumbles on gathering momentum as it goes.

Lopez, currently serving a suspension till Feb. 2013 for insulting the referee after his last fight, and loss to Orlando Salido, was ringside for Vazquez’s fight with Oquendo. That night, more words were exchanged in the ring between the two, after Wilfredo’s victory.

In an interview last week when Vazquez Jr. was asked about the latest altercation he said, “I told Lopez I was ready for him, but he’s very conceited and believes he’s the only coca cola in the dessert. He’s had a good run and I’m happy for him, he told me that night that he was going to “pay me what I deserve”. Who does he think he is? Floyd Mayweather? A guy with 11 losses, Salido, beat him twice, in his own house. He has power but no talent at all, I’ll fight him anywhere, anytime he wants.  If it does happen, he will end up far worse than Oquendo did.”

Lopez responded saying, “With all due respect, he’s right. I’m not Floyd Mayweather, but by the same token, he’s not Juanma Lopez. The reality of the situation is I earn three, maybe four times the amount per fight than he does. This is simple, all he has to do is tell his promoter Felix  Zabala, (a friend of mine) to call Peter Rivera. They can meet my manager, Orlando Pinero reach a deal, then we can fight.”

When Zabala was asked about the possibility of a showdown between the two rivals, he said he would love a clash to happen, and for Vasquez Jr. to move up to 130 to face Lopez but not as soon as Arum has mentioned. “I want the fight to happen, but more time is needed. If Vasquez gets his title back, and Juanma gets a win, it’ll make for a much bigger fight. They could maybe fight in New York in June, just before the Puerto Rico day parade, and it would be a huge event.”

So it seems the stage is set for an all Puerto Rican war in the near future. That said, Vazquez’s win over Oquendo made him the mandatory challenger to the WBO belt retained by old rival Nonito Donaire, with his ninth round stoppage over Nishioka last weekend. Zabala also said, “We want that rematch too (Donaire), but it’s a lot more difficult to make.”  Adding, “I read that Donaire may move up to featherweight in his next fight. So there is a possibility that Wilfredo could be fighting for a vacant title, there are lots of possibilities at this time for us.” Other options must surely include Vic Darchinyan, a Jorge Arce rematch, Rafael Marquez or fellow Puerto Rican Luis Del Valle.

Whoever is next, fight fans are in for an exciting 2013.