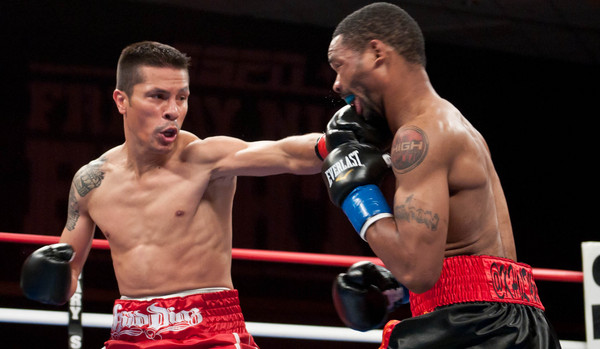 Amir Khan is scheduled to return April 27th in the UK. There have been rumors that certain opponents have turned down the chance to fight Khan is his native country. One fighter who has not turned down the offer was Julio Diaz.

Diaz was a guest on ThaBoxingVoice Radio Show last night and basically stated that the fight is a go with the only part required is Khan’s signature. “Yes so far from what I’ve heard that’s what the plans are. I’d have to go to 143 to fight at that weight. As of now, my contract is signed and sent in and we already agreed upon a deal and everything looks secure. So now we’re just waiting for some sort of confirmation from the Khan Camp. So we’re just waiting on the Khan Camp,” Diaz told ThaBoxingVoice.

Julio Diaz, the brother of Tim Bradley’s trainer Joel, doesn’t see the weight as being an issue and with time feels he could make it comfortably.

Dropping down in weight and going into enemy territory might not have been the ideal situation for Diaz but he understands that he is in no shape or status to make demands.

“I requested 147 then 145 but I’m not in a position to negotiate or to demand too much. Not to sound desperate, I’m just pushing for someone to let me in the doors. He said he wants to fight in his hometown and to fight at 143. Whatever he demands, I’m a have to go with it because he’s giving me the opportunity.”

If and when the fight is made, Diaz knows he will be the underdog but he definitely feels he has a puncher’s chance. “I’m a heavy hitter that will trouble Khan. I don’t think he’ll be able to take my punch. Shawn Porter was my warm up fight. Khan has a lot of weaknesses, he can’t take a punch. My plan would be to make it a brawl,” explained Diaz.

Diaz spoke of his last two fights in recent memory that resonates with the U.S. fans. The first fight was the knockout loss to Kendall Holt at 140 lbs and the other, the draw with Porter at 147 lbs. Regarding the Porter fight, Diaz stated, “It was a draw in a fight that he was supposed to win and I thought I won the fight because if he would have clearly won the fight, I don’t think they would have ruled it a draw. I felt comfortable in that fight and I had no issues in the weight and I knew I could beat him. I didn’t come to be a stepping stone and I won’t be for the Khan fight.”

As far as the Holt fight, he explained, “It was a weight issue from the beginning. I had problems making weight. I declined that fight 3 or 4 fights but I had no other option at the time so I had to take it. But my body at that weight would not take a punch well.”

Even though the chances of him landing the fight look good, you never know in boxing. Diaz would be prepared to go another route if given the chance. “If not Khan, we want Josesito Lopez, Humberto Soto, both guys coming back from a loss or one fight removed from one, and both guys that would make good fights.”

For Full Audio of this interview click here: http://thaboxingvoice.cogito24.com/jesse-james-leija-joe-cortez-julio-diaz-plus-weekend-recap/10459