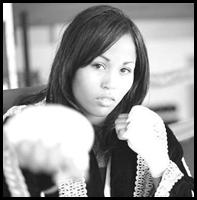 “The promoters in [North] America don’t know what they are doing,” said an angered Kaliesha West. What prompted this response was a simple question, why hasn’t the biggest fight in women’s boxing between West and Ava Knight happened? To contextualize, the two women, West and Knight, have fought two times before – the first went the favor of the Knight, the second a draw. What makes the trilogy interesting is both women feel that they won the second match.

“…the second fight was ruled a draw, but ask anyone there that night, I won,” West stated. Though the third meeting will happen in the future, frustrations around the sport West loves and the politics that she hates seem to cross, making a bittersweet dynamic. On top of all of the politics, when the fight was all said and done it simply wasn’t profitable.

“I want the fight and so does Ava [Knight], we just want on a major U.S network. We deserve it!”

The sad truth is, despite the Ultimate Fighting Championship’s biggest star is Ronda Rousey and the start-up all women’s MMA promotion founded by Shannon Knapp, Invicta FC. Boxing is way behind the curve when it comes to women getting a push and televised fights.

While women in the MMA are getting showcased on a reality television show called The Ultimate Fighter, the state of women’s boxing is simple. If you want to fight, you need to go to Mexico and you need to fight a Mexican. It’s not the most appealing proposition as it alienates fighters from potentially having friends and family attend their fights. Fighters do it with hopes of making it back to North America on a Solo Boxeo feed on tape delay, if lucky.

West, who did not fight all of last year because of foray into reality television is frustrated and not one to be bashful. “I got a lot of heat for my Floyd Mayweather video, but you know what? A lot of people interacted with me and helped grow my presence from it, and guess what? Everything I said had valid points.” The video West is referencing is one in which she expressed the frustration over the promotion of women’s boxing as it is all but extinct in the United States, with barely any financial support or pay out to fighters. An emotional West questioned how Floyd Mayweather could spend $50,000 on strippers, but won’t help in promoting the highest level of women’s boxing.

The question is valid as is the frustration. It would be like investing the same dollars in educating a doctor, to come out and make the salary of someone with just undergraduate degree. Instead of education, the commitment for West was to the sport of boxing. Now West seeks the financial gain that she sees her peers, who are male, are getting.

“I was left off TV after being told I would be on. It was a WBO Bantamweight title fight against Angel Gladney. It was a good fight and it had a finish. Did they show it? NO! Everyone likes a finish.” – Mora and Mosley is widely considered by many as the epitome of a dud of a main event and worse it was on pay per view.

The card West was excluded from was the pay-per-view fight that forever lives in infamy. Mosley and Mora fought a strategic battle to a 12 round draw on a PPV. The main card, which featured quick knockout, wins for Victor Ortiz and Daniel Ponce De Leon as well as Saul “Canelo” Alvarez’s destruction of Carlos Baldomir, somehow could not find room for West.

West also expressed her displeasure with an industry insider, Sam Watson. “He is a chauvinist,” West explained as she expressed. “[Watson] told me Golden Boy had no interest in women’s boxing.

West has over the past year created a new way of building her brand, based of Southern California and within reach of Hollywood, West has headed to television. She was featured on The Wayne Brady Show as well as CW’s “The Capture” this past year as well as the following Sony commercial (link)

“It’s frustrating though, because it is really hard to be on a reality show yet can’t get marketing and sponsors behind you when you can’t give them a date to fight….they will ask you when are you fighting and when you can’t give a date it makes it harder for them to want to give you that opportunity.”

“There is a new crop of women coming up right now who are amateurs and I will be pissed off if I can’t watch them when I retire.” For West, it is bigger than just one pay day, exposure and fame. It is respect for a whole sport that has not gotten a true star since Lucia Rikjer, and for every new emerging star. The pessimist may think about Mia St. John, who appeared to be more of a pretty face than a technical fighter. The scars still linger, and the perception is being rebuilt from the mid to late 90s when the women’s boxing was in its heyday, and then went away.

West wants respect not just for herself, but for all women in the sport of boxing. It’s a respect that she is no longer being passive about getting and wants to make public; it is the respect she deserves. Kaliesha West can be followed on twitter @Kwildwildwest