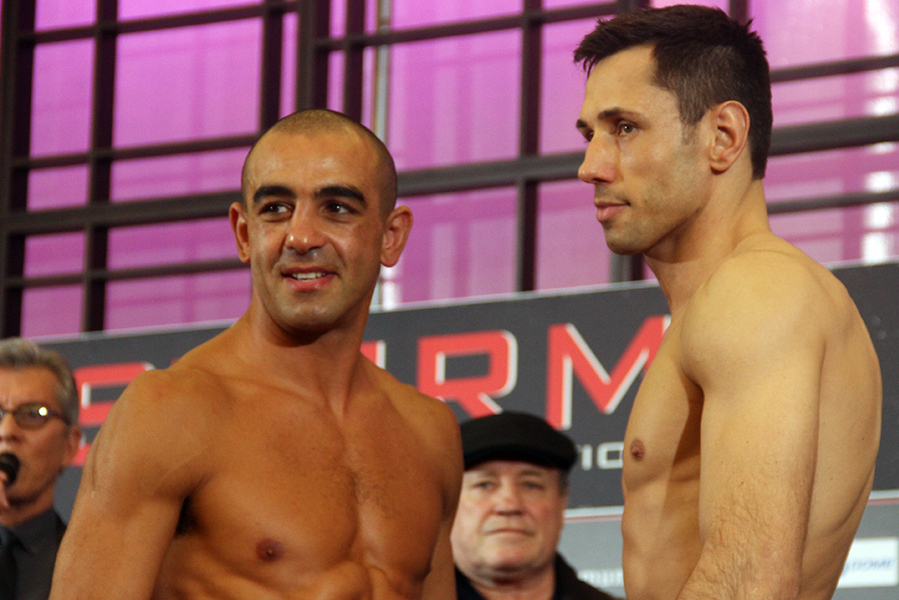 The Hindu religious ideology of karma is concept that a being’s actions have a direct correlation to the future. In layman’s terms: what goes around comes around.

Historically Germany had been a fortress to former WBA middleweight champion Felix Sturm, with close, controversial, decisions against the likes of Matthew Macklin and Martin Murray going in his favour. Tonight in Dusseldorf Sturm fell victim to karmic retribution as Australian, Sam Soliman shocked the world by winning a unanimous decision.

Sturm shaded a tentative opener with his ever accurate jab.

The second stanza burst into life when the German caught his opponent with a hard right hand sending the Australian to the canvas. Soliman, clearly shaken went into survival mode for the remainder of the round.

In the third Soliman was once again hurt and it appeared the “King” was en route to succumbing to the second stoppage loss of his 54 fight career. In the fourth the 39-year-old began to warm to the task and began to out-work Sturm but the clearer work of the German stole the round.

The previous round set the tempo for the remainder of the fight as Sturm’s early exertion of energy appeared to have drained him, his work rate dropping considerably as the fight went on. Soliman routinely out-worked his opponent, marching forward launching crude attack after crude attack, not everything was landing but it dragged Sturm into a fight he is clearly not suited to. The German born Bosnian answered the Aussie’s whirlwind of aggression with a series of well timed counters.

At the end of what descended in to a war of attrition both men waited expectantly for Michael Buffer to read the judges score cards: 116-111, 114-113, 114-113 to the winner from Deutschland. The crowd roared, their hero had come through a tougher than expected battle had earned himself a second shot at his previous conqueror Daniel Geale.

The cheers however, were short lived as Buffer announced the winner was in fact Sam Soliman. While the fight was undoubtedly close it is hard to conceive how all three judges favoured the aggression of Soliman over the cleaner work of Sturm.

Soliman now progresses onto an all Australian showdown with Daniel Geale while Sturm’s future hangs in the balance. Prior to the contest the 34-year-old stated he would retire. If this truly is the end for Sturm he will always be remembered for his ten years worth of title fights and one of the most effective jabs in middleweight history.