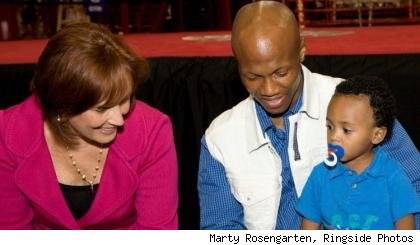 Once upon a time, there was a boxing promotional company that strived to be the first company to bring the sweet science back to terrestrial television. Well what was once a dream is now a reality. Except, that the company that said they were bringing it back is not the one making the jump.

Golden Boy Promotions and its figure head Oscar De La Hoya were dead set on making history and becoming the first in a long time to do so. However, the underdog, in Main Events, struck gold on their NBC Sports Network, and landed an afternoon slot on the mother ship NBC on December 22nd. Speaking with the brains of the operation, the CEO of Main Events Kathy Duva, regarding this monumental occasion, she says, “It’s a natural evolution of The NBC Sports Network into taking the next step.” Because the ratings of the Fight Night Series have been so good, on top of adding more dates to the series, it is the natural step to make a venture to terrestrial television. Duva knows she must capitalize on every opportunity. “The NBC date has to involve European fighters in the afternoon time slot. NBC was willing to try it. No fight is set for that day. Adamek would be the right fighter for that day but the ultimate goal is staging fights that day where you don’t know who’s going to win.”

If Adamek is to get the date, he must win on his already scheduled September 8th date. There should be an opponent finalized this week for Adamek.  But the big date for Adamek will be in December should he win, because he is the obvious favorite to land the December NBC date because Duva is looking to display heavyweights, and Duva is looking to maximize on the European revenue that Adamek brings in on pay-per-view in his native Poland. “Adamek loses money when he fights at night because of his big following in Poland so the afternoon would be best for Adamek. September is a stay busy fight with an eye on the bigger prize.”

Because of a scheduling conflict, should Adamek get the date, the fight will not take place in Adamek home base of Newark, NJ. Although Kathy wasn’t too forthcoming about the opponent should Adamek get the date,  when I mentioned guys like Kubrat Pulev, Odlandier Solis, and Alexander Povetkin (keeping with the heavyweight trend), she laughed and said, “That’s quick and good thinking, Those 3 are all at the top of the list and would make for great fights on the December date.”

One heavyweight likely to land on one of the December dates according to Duva is Eddie Chambers. Duva loved his performance against Adamek that she went over herself to Chambers and said, “We’re definitely brining you back.”

A fight that has recently run ramped on social media has been a matchup of newly unified champion junior welterweight champion, Danny Garcia and IBF mandatory Zab Judah. While the words between the two fighters have spread through twitter, Duva doesn’t see that fight happening anytime soon. “We’ve wanted that fight since March, but Golden Boy has other guys in their stable that they will probably match Danny up with. But if they come calling, it’s a fight we’d love to make,” said Duva.

There are plans on the horizon for Judah. He is the mandatory for the IBF belt that is still currently held by Lamont Peterson. The IBF will be deciding soon what will come from that belt due to Peterson’s positive test for a banned substance. Should Peterson get to keep the title, Duva says, “That will be the fight we would make. If he doesn’t keep the title, then the title would be vacant and a Mike Alvarado fight is at the top of the list.” There was a rumor that a fight between Judah and Alvarado could land on the Chavez-Martinez undercard. Duva however says, “That’s not an undercard fight. It should be a main event. If it goes that route, it will most likely go to a purse bid and If Top Rank wins it, they can put it on their undercard, but the quality of a fight like that is main event worthy.”

Gabriel Campillo vs. Sergey Kovalev is a fight that will headline the September 21st edition of Fight Nights on the NBC Sports Network. Duva has never had qualms about involving other promoters in her deal and all she’s concerned with is making big fights. In fact she says, “This was probably the easiest fight I’ve ever made. We called Sampson Lewkowicz with the figures. He asked if we wanted an option on his fighter, and we said no,  as long as you are in agreement to the numbers for the fight on that night, then we have a fight. So we have a fight between a former world champion in Campillo who’s been robbed twice versus a guy who stopped Darnell Boone, something that’s never been done before. I said it before, I just want to make the best fights where we don’t know who’s going to win, and that’s what makes boxing great.”