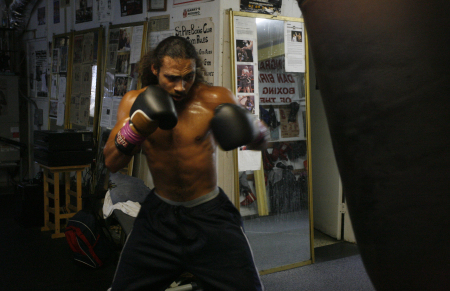 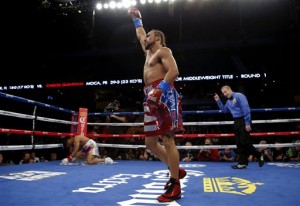 WBA World welterweight champion Keith ‘One Time’ Thurman(24-0, 21KO’s) will defend his belt for the very first time against Robert ‘The Ghost’ Guerrero(32-2-1, 18KO’s) on March 7th at the MGM Grand in Las Vegas.

A few days prior to the highest-profile bout of his career so far -where he will headline the ‘Premier Boxing Champions’ card on boxing’s return to network television on NBC. He spoke to Thaboxingvoice.com, beginning by taking us through his mental preparation for this fight and whether it differs to that for his previous contests.

That’s Samurai talk right there. This kind of mental preparation, coupled with his obvious physical gifts are what make Thurman such a daunting task for his opponents. At the time, he was speaking he had a very clear idea of what to expect from his opponent on the 7th.

“Guerrero likes to double up on his left a lot. As a southpaw, he throws a lot of left hooks, straight lefts, and a lot of left uppercuts so I’m expecting a lot of that all night Saturday night. We’re gonna keep the right hand up high; we’re gonna roll with those punches.”

It speaks volumes for Thurman’s confidence that he is willing to share the specific weapons he is looking to diffuse from Guerrero on the night. But then again, Guerrero is unlikely to alter his game-plan or change certain habits he has come to develop over the years just days before the fight. Perhaps this was just a touch of bravado.

One of those habits is his tendency to just steamroll his opponents, out-man them if you will. With a puncher like Thurman in front of him, this blunt approach may very well work against him, as Thurman seems to think.

“Definitely possibly, you know he could run right into a punch. Bundu went down. For those who don’t know the history or only watched the last fight and make a judgement off of that, what you gotta understand is I’m 24-0 with 21 knockouts ok? Everyone I put hands on went down except for one opponent that was Jan Zaveck for twelve rounds, he did not touch the mat. Everybody else I either TKO’d, KO’d, or they at least touched the mat once throughout the fight, and I don’t expect Robert Guerrero to be any different.”

It sounds like Thurman is trying to compensate for his last performance, which I thought was a disciplined display of hitting and moving for twelve rounds, the type of performance critics would say he isn’t capable of if he kept on sparking people out. To me, he showed he is more than just a puncher, which he had showed in spurts before the Bundu win but never for the entirety of a fight.

He may well need to do it again against a battle-hardened campaigner like Guererro, who has never been stopped and has but one clear defeat on his record, and that was to Floyd Mayweather Jr. A resounding victory here will legitimise Thurman as a top-level performer, evolved from the dangerous prospect who has yet to face a big name. This could be his coming-out party.