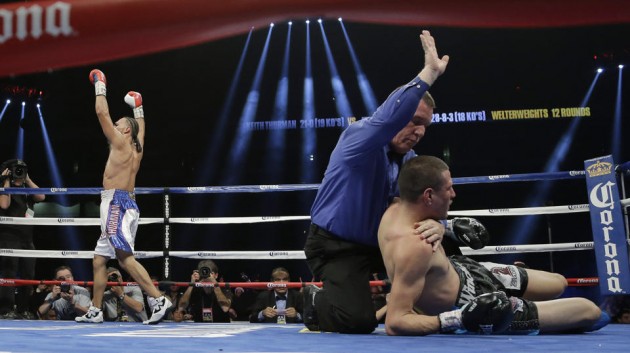 In the co-main event of Showtime’s Dec. 14th Championship Boxing broadcast, Keith Thurman (22-0, 20 knockouts) took on Jesus Soto Karass (28-9-3, 18 knockouts) in a fight that would not only serve as a guarantee crowd pleaser, but as a gauge for Thurman’s potential in a talent stacked welterweight division.

In the build-up to the bout, Thurman’s confidence was brimming so it was no surprise that the attitude carried over into the bout. Both fighters answered the opening bell both aggressive and collected, but it was Thurman who was banking on a slow start by Karass. While both fighters exchanged jabs, Karass followed up with a counter right hand that badly wobbled Thurman. Although Thurman looked like he was in trouble he managed to keep his composure, and respond with his own vicious uppercut before shifting the focus of his attack to his opponent’s body. Thurman managed to seemingly stun Karass by the end of the round, but it proved to be too late to attempt the stoppage.

After that slip-up in the first round, Thurman stuck to his masterfully crafted gameplan and resorted to superior footwork and head movement to set up counters and allow him to pick his shots. Thurman’s gameplan was causing all kinds of problems for the rather one-dimensional, but tough as nails Karass, but the Mexican still did his best to keep up with and often thwart the younger fighter.With each passing round, Thurman’s confidence and effectiveness only grew as he began to pick apart the hard charging Soto Karass.

By round 5 it appeared Soto Karass had finally gotten a grasp of Thurman’s timing as he managed to counter a few of his shots, but Thurman was far too effective with his jab and ultimately used it to set up the uppercut which floored Soto Karass. This led to Soto Karass coming out especially aggressive in the rounds that followed in hopes of erasing the early deficit, but Thurman managed to weather than storm once again thanks to superior technique and a solid chin.

It was becoming clear that the blows were beginning to take their toll on Soto Karass while Thurman seemed just as strong then as he did at the beginning of the fight. In a move of desperation, Soto Karass attempted to instigate a brawl in center-ring in hopes of catching and stopping Thurman. Each fighter gave and took their share, but eventually it was Thurman who began landing shots at will. Soto Karass managed to stay with him, but following a pair of brutal hooks Soto Karass was stunned and seemingly out on his feet. Thurman followed up with another hook, and Soto Karass was sent crashing to the canvas as the ref waved off the fight.

Although the victory didn’t come easy, Thurman proved to be just as dominant as ever, even with an opponent as tough as Jesus Soto Karass. Even with the few flaws in his game, Thurman proved to be much more than the singular power puncher so many labeled him as at the start of his career. With this win over Karass Thurman didn’t just earn the respect of his peers, but punched his way among the top of the division.