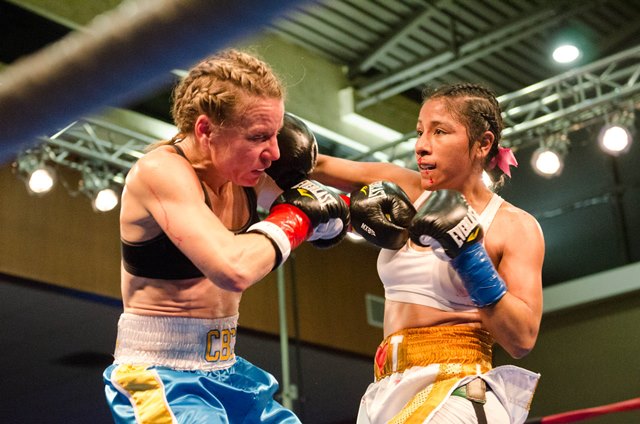 Mexican fighter Kenia Enriquez popularity continues to rise with her victory this past Friday over Jolene Blackshear in San Diego, California in front of a sold out crowd courtesy of Bobby D Presents.

Enriquez took control of the fight from the early rounds and used her jab  and reach to avoid the inside attack from Blackshear and by round four began open up more on Blackshear who was able to time her and bloody her nose.

In round five the blood seemed to motivate Enriquez who staggered her opponent but was unable to take her out. By then both fighters went for the kill.

In the seventh round Enriquez connected with three consecutive left hooks which hurt Blackshear which ignited Enriquez who then went in for the kill. The referee stopped the bout at 1:26 of round seven.

In the co-main event Amaris Quintana defeated Susan Reno via unanimous decision in a six round junior flyweight bout.

Quintana went straight at her opponent from the opening bell and attacked the body of Reno and continued her attack throughout the bout. The judges’ scorecards read 60-54 all in Quintana’s favor.