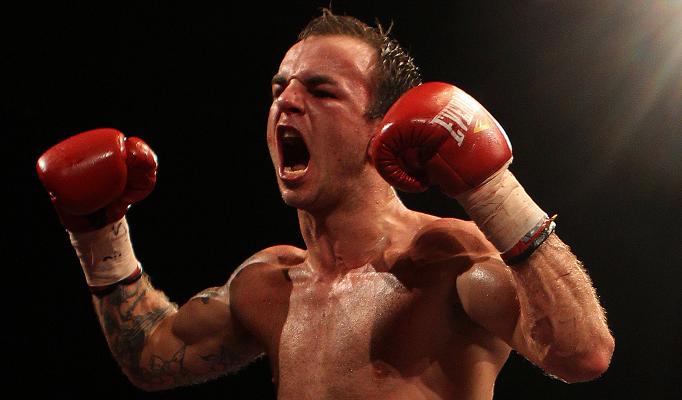 Three-division world champion Linares (38-3) is expected to pose a stern challenge to Mitchell (39-2) when the two square off on Saturday from the O2 Arena in London.

Mitchell has been stopped twice in his career, notably against former interim WBO World lightweight champion Michael Katsidis and former two-division world champion Ricky Burns. He hasn’t lost in three years but hasn’t faced any notable opposition since, either.

Mitchell did manage to stop Daniel Estrada inside the eighth round in January, but that was on the heels of a brutal knockout defeat against Omar Figueroa Jr. in August 2014, thanks to a luscious overhand right, which Estrada never saw coming.

Mitchell suffered the nose injury while sparring in Texas last month, but the 30-year-old added that it’s an old wound that reoccurs, and won’t affect him on the evening of the fight.
Speaking to Sky Sports, Mitchell revealed how the injury came about.

“I picked it up in sparring with Ricky [Burns] about a year ago. It was before the Wembley show. It was the week before the fight, and we were touch-sparring and he threw a right hand over that cut me slightly.

“Then, I was in Texas sparring a Mexican – same thing, long range, and he threw a right that came through the headguard.

“It definitely won’t be a problem. It’ll be fine. It’s below the eyes and it’s healing very quickly. It’s fine. He hasn’t hit me yet anyway.

“All of West Ham will be there and the crowd will be booming. I’ll the rock gaff, watch!”

Like his opponent across the ring on Saturday, Jorge Linares has tasted defeat in his career, with all three defeats coming by way of stoppages.

Like Mitchell, he has recovered to win every bout since against less than notable opposition. Five of his last seven victories have come by way of knockout or stoppage.

In December, Linares defeated Javier Prieto by fourth-round knockout to snag the vacant WBC World lightweight title. Linares fought a very smart, calculated fight, and picked the 27-year-old apart, knocking him out with a lead uppercut to the chin which landed flush, leaving his opponent to look like he was tanning on the beaches of Carmel.

The impending bout will be Mitchell’s third attempt at a world title, and Mitchell believes he has become more disciplined as a boxer with age.

“The difference is maturity. With age, you become a different person. I remember being 18 years of age and wanting to take on the world. It was never going to happen,” said Mitchell.

Leading up to his May 2014 bout against previously unbeaten Ghislain Maduma, Mitchell lost his chance to become the mandatory challenger for the IBF lightweight title when Mitchell’s overnight weight gain was 2 lbs. more than the 10 lbs. more than the IBF rules permitted, which paints a different image in the maturity category. He went on to win by 11th round TKO regardless.

“It was a long road, but I’ve had two good years back with Tony Sims now. He’s done so many good things for me. The whole team around me at the moment is perfect.

“We have a good laugh in the gym. We have a few jokes, but when it’s flowing in there, it’s unbelievable, it really is. We’ve got a few close friends that come down in there, and they watch it and enjoy it. Everyone gives each other advice – it’s great.”

This past weekend, James DeGale defeated Andre Dirrell to claim the vacant IBF super-middleweight title. Mitchell was truly for his fellow countryman.

“I was so happy for James DeGale. He was put under a lot of pressure. I remember when we were kids, and he first got his nickname of ‘Chunky’ – he’s come on and been a gold medalist and a world champion,” said Mitchell.

DeGale became the first man in British boxing history to win an Olympic gold medal and go on to become a world champion.

“I know he can come across as brash on TV, but he’s a good man and a gentleman. Now, he’s a world champion. I’ll be doing it next week.”

Kell Brook will also be defending his IBF World welterweight title against Frankie Gavin, Lee Selby is challenging Evgeny Gradovich for his IBF World featherweight title, and Anthony Joshua looks to extend his undefeated professional record, as well as his knockout streak, against Kevin Johnson, who has never been knocked out or stopped in his career.