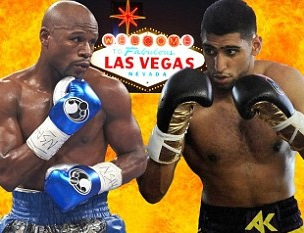 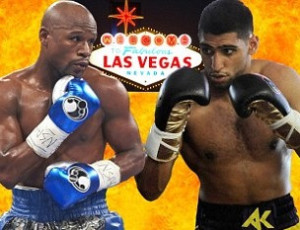 Floyd Mayweather Jr. repeated himself again and again this weekend at the MGM Grand – he’s only interested in fighting Andre Berto or Karim Mayfield – but like many in the boxing world, no one is taking him seriously.

Berto and Mayfield are both sparring partners of a particular somebody who has been trying to snag a Mayweather fight for years – and that’s Amir Khan.

Mayfield hasn’t even competed in a 12-round fight and the San Francisco-based fighter was considered as a replacement for Roberto Garcia to face Errol Spence Jr., but after a blood examination was conducted, Mayfield was notified three hours later that he was not approved.

It sounds like something was fishy with the drug test. Knowing Mayweather’s stance on Olympic-style blood and urine testing, I don’t think Mayfield has even the slightest chance of fighting Mayweather.

Khan also wants former eight-division champion Manny Pacquiao, but he’s not going to be available until at least 2016 as he recovers from shoulder surgery.

With Pacquiao out, Khan is focusing his attention on Mayweather, speaking with Thenational.ae.

“If Manny mans up and wants to take the fight, then it will happen, but the only fight I am interested in right now is Floyd Mayweather. Everywhere I go, fans ask me only one question: When are you fighting Floyd?”

Like the legendary Bernard Hopkins, the 38-year-old Mayweather is a master of psychological warfare. A year ago, Mayweather claimed he would fight the man the fans wanted him to fight, so he made a poll.

The poll came down to Amir Khan or Marcos Maidana. Khan thought he was going to get the fight for sure, so he canceled a title opportunity against Devon Alexander in December 2013 for his shot at the fight of his dreams.

After Mayweather had chosen Maidana, it left Khan feeling bummed and stupid.

The WBC Silver welterweight champion is in the same position, with Mayweather in control of the pendulum. Will 2015 provide anything different?

If the fight does happen, the question is, who is going to be more hypnotized? Will Khan gain control of the pendulum with his hand speed or will Mayweather nullify his efforts with his superior ring intelligence.

Khan’s trainer Virgil Hunter has even stated that his fighter will never match Mayweather’s ring IQ, which is clearly a bad sign.

Based off Khan’s performance against Chris Algieri, the Bolton fighter is tentative against guys that make him think, and his hand speed in that fight was nowhere as blazing as it was against Devon Alexander in December 2014.